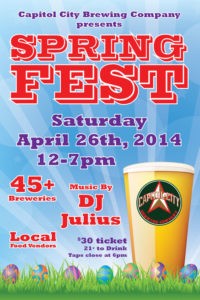 Capitol City Brewing Company plans to shut down the streets of Shirlington next month for an outdoor beer festival.

The event, the inaugural Springfest, is planned for Saturday, April 26 from noon to 7:00 p.m. Forty-five breweries, almost exclusively from Virginia, D.C. and Maryland, are expected to pour their brews at booths. According to Capitol City Director of Brewing Operations Kristi Griner, the format will be the same as Capitol City’s annual Octoberfest, but the event will be smaller.

Partygoers can pay $30, which will give them a wristband and 10 tasting tickets. Additional tickets are $1 apiece, but must be bought at least five at a time. The event will likely shut down Campbell Avenue in Shirlington Village, although specifics about road closures have not been determined.

In addition to the beer, Griner said she expects neighboring Shirlington restaurants, like Copperwood Tavern and Samuel Beckett’s to participate and offer food to the festival patrons. DJ Julius, who hosts Capitol City’s karaoke nights, will provide the music. The taps will be turned off at 6:00 p.m.

“We’re trying to do something to help stir up the first quarter,” Griner said. “But spring is here, and especially after this winter in particular, everybody is ready to get outside. It seemed like a good bookend to winter with our Oktoberfest.”