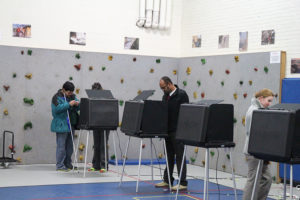 Arlington’s unofficial election prognosticator, Treasurer Frank O’Leary, expects the special election to draw between 35,000 and 37,000 votes, dwarfing the previous record for a special election —  21,624 votes, set in 2003 — and rivaling the odd-year election records of 2011 and the constitutional amendment year of 1999.

“The natives are clearly restless,” O’Leary said in an email. “This fervor may reflect disgruntled voters responding to [John] Vihstadt’s energetic efforts to torpedo the aquatic center and derail the streetcar. Similarly, it may arise from the equally energetic efforts of the newly-minted ACDC Chairman — Kip Malinosky (who cannot afford to lose his maiden effort) and a determined Democratic candidate — Alan Howze — who has rapped his knuckles on thousands of voters’ doors.”

O’Leary is projecting about 2,750 absentee votes will be cast, compared with the 2011 general election that saw 2,248. Along with Democrat Howze and Republican- and Green-endorsed independent John Vihstadt, independent Stephen Holbrook and Independent Green candidate Janet Murphy are also running.

“Turnout resulting from this tempestuous mix,” O’Leary wrote, “will be further enhanced by the later-than-usual voting date of April 8, coupled with an extra hour of sunlight at day’s end.”