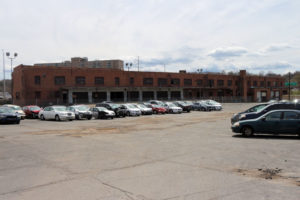 The site near Shirlington that was once eyed for an urban-style Walmart appears on its way to becoming a self-storage facility.

The site, at 2631 Shirlington Road, is currently occupied by Redman Fleet Services, a towing and truck service company that has a contract with the Arlington County Police Department. Big box retailer Walmart was thinking about building a store there in 2011, which prompted the County Board to change its zoning ordinance so it could regulate the design and plans for Walmart or other “big box” retailers.

The plans for the Walmart ultimately fell through, and the run-down two-story warehouse and large car storage lot on 2631 Shirlington Road remain. The building, however, has been approved for demolition and, in its place, a five-story facility referred to as “Shirlington Self Storage” has been proposed to take its place.

The self-storage facility’s building permit has been approved by county staff, but the zoning application was tentatively rejected in its last review by staff, which said an ongoing subdivision process needs to be completed before the zoning can be approved.