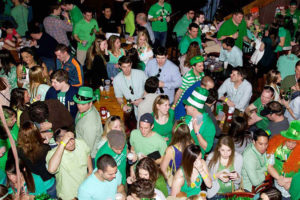 The number and popularity of bar crawls in Arlington has increased, and it’s caught the attention of the Arlington County Police Department and county government.

At the Arlington County Board’s budget mark-up meeting this afternoon, the County Board approved an addition $42,000 to the police specifically for “pub crawl support.” Pub crawls in Clarendon, Courthouse and Ballston have drawn crowds close to 5,000-6,000 people, County Board Chair Jay Fisette said.

“I’m becoming a pub crawl expert, not by choice,” Arlington Police Chief Doug Scott told the Board Wednesday. “We are receiving crawl requests at a very escalated pace because they’ve been very popular. We thought we were going to have three, that went to nine, and it’s growing.”

Scott said he’s planning a meeting with the Clarendon-Courthouse Civic Association on April 30, but told ARLnow.com a time and a location have not been finalized yet. He and the Board discussed the potential for regulatory measures for potentially reining in the crawls, or requesting the restaurants and/or organizers provide the funds for the police support.

“There are a lot of legal issues around some of the choices the manager and board will have in terms of how we address these crawls in the future,” Scott said.

Board Member Libby Garvey asked Scott if the crawls were “a little like Mardi Gras except all year long.” Board Member Mary Hynes, who lives near Clarendon, said she has had a hard time wading through the revelers when she wants “to go to the grocery store.”

Lines for bars extend far down the sidewalk for many of the bar crawls, which include crawls on St. Patrick’s Day, Halloween and other holidays. A bar crawl in late June last year led to 13 alcohol-related arrests, and one reveler during this year’s Shamrock Crawl showed up naked to the Arlington County Jail while trying to visit her husband, who was arrested during the crawl.

“Our level of disorderliness really escalates on days where we have pub crawls,” said Scott, who told the Board he’s reached out to law enforcement in cities around the country to ask how they’ve handled bar crawls. “I just signed off today on a comprehensive ground response. I think there’s no aspect of the community, especially around some of these bar locations, that are not impacted.”

The April 30 meeting appears to be the first step toward the Board possibly setting new policies regarding pub crawls. Board member Walter Tejada, however, cautioned against taking too harsh a stance against the events.

“I want to be careful not to be the hardheaded government keeping people from having fun,” he said. “I want to strike that balance, but it’s an issue of safety. If you have data that it could be leading to bad things, then we can’t ignore it.”