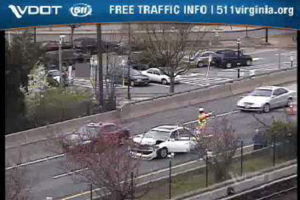 Update at 1:20 p.m. — Arlington County announced that a tow truck is on scene and all lanes of traffic should open shortly.

All lanes of I-66 eastbound at N. Sycamore Street are currently shut down as police and firefighters clear the scene of a multi-vehicle accident.

Virginia State Police, and Arlington County police and fire and rescue workers responded just before 12:30 p.m. to a three-car crash, including one of the cars suffering a head-on collision, according to scanner traffic.

At least one driver was injured in the crash and required medical transport, but it’s unclear the extent of the driver’s injuries at this time.

Traffic is reportedly getting by on the left shoulder, but drivers should avoid the area for the time being.