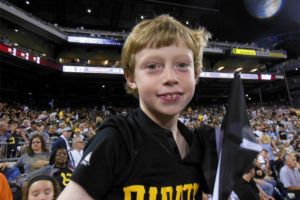 Andrew Alford, a third-grader at Long Branch Elementary School, died for still-unexplained reasons on April 11. This Saturday several groups around Arlington are organizing fundraisers and events to honor his memory.

This Saturday at 6:45 p.m., Arlington Little League, in cooperation with the Mothers of North Arlington, Long Branch PTA and Evolve All Martial Arts, is coordinating a memorial ceremony at Barcroft Sport and Fitness Center (4200 S. Four Mile Run Drive) on baseball field No. 1. Those in attendance are asked to wear orange, Andrew’s favorite color, and to write remembrances of Andrew for his family to keep.

“While for me this is a personal tragedy that I will never recover from, the community has been amazing in their support of Andrew and me in their efforts to honor his memory and the amazing boy he was,” Louisa Marinaccio, Andrew’s mother, told ARLnow.com in an email. “Andrew loved orange, the Pittsburgh Pirates and his momma. He dreamed of pitching for the Pirates in the World Series and owning a mint condition Honus Wagner card.” 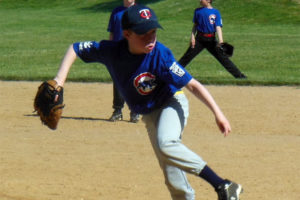 In addition to the event Saturday night, the Arlington Little League has pledged to transform the dirt field at Long Branch in Lyon Park into a full-fledged baseball field in an effort they’ve named the Andrew Alford Memorial Project. Marinaccio said Frank Coonelly, the president of the Pittsburgh Pirates, reached out to her and pledged to donate to the fund.

In addition, MONA will start the Andrew Alford Buddy Bench Project, according to Marinaccio, “as an annual community service project with a goal of installing an orange Buddy Bench in Andrew’s honor at every elementary school in Arlington.”

Arlington Little League President Adam Balutis recounted his favorite Andrew story in an email he wrote to the parents of little leaguers.

“He was playing catcher on a close play at the plate, and an opposing player slid hard into Andrew, accidentally hitting him in the face with his cleats,” Balutis wrote. “With dirt and blood all over his face, Andrew’s mother told him that all the girls at school would say he looked cute and tough and cool. She said Andrew refused to wash his face for hours.”

A lonely utility pole protruding into the intersection of Columbia Pike and S. Frederick Street is expected to come down by the end of the year, a county official tells…

Arlington Has High Kid Vax Rate — “Virginia schools have about 420,000 children between the ages of 12 and 15, and about 63 percent of them have received at least…

The University of Virginia is expanding its footprint in Northern Virginia, including its Rosslyn campus. The university currently operates a satellite location of its Darden School of Business in the…