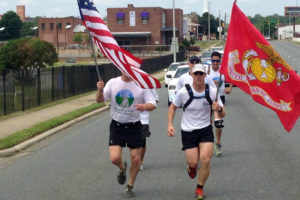 (Updated at 4:00 p.m.) Seven U.S. Marines, one member of the U.S. Navy and one civilian are in the middle of running the 684 miles from Atlanta to Arlington to raise awareness for traumatic brain injuries among veterans.

The crew left Atlanta Monday morning, according to organizer and the lone civilian runner, Travis Ellis. They plan to conclude their journey at the U.S. Marine Corps War Memorial near Rosslyn Sunday at noon.

The group calls themselves “Shepherd’s Men,” after the Shepherd Center in Atlanta, Ga., which houses the SHARE Military Initiative, a privately owned facility that treats veterans for traumatic brain injuries, including post-traumatic stress disorder. Ellis said it’s the only private facility in the country focused on veterans’ brain injuries, a status quo he hopes to change.

“It’s estimated that approximately 300,000 of those deployed in the last 13 years have been diagnosed with a traumatic brain injury,” Ellis told ARLnow.com while taking a break from running to Lynchburg, Va., this afternoon. “Every 65 minutes, a veteran or active duty member takes his or her own life. More needs to be done to help serve them and lift them up when they return home.”

While the Shepherd’s Men are running, they hope to raise $100,000, which would fund the SHARE program for a full month, he said. His hope is that more private programs serving veterans will arise as a result of increased awaress; the SHARE program only has capacity to serve 40 patients a year.

Each of the nine runners is covering about 13 miles per day, Ellis said, with each runner covering four miles on Sunday for their final leg from Manassas to the Iwo Jima memorial.

The seven-day endurance challenge has been in planning since January, Ellis said, with all the runners undergoing rigorous training programs to prepare them (although that didn’t prevent some nasty blisters).  That their cause aligns with the growing scandal surrounding patient care at VA hospitals is coincidental.

“It’s purely coincidence,” Ellis said. “Everything related to that just serves as example for the need for private institutions with the ability and capacity for these services.”