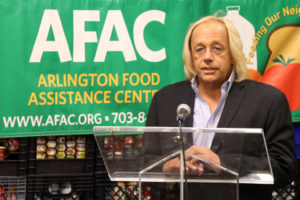 The Arlington Food Assistance Center, which provides meals to families in need, is experiencing a boom in demand that it doesn’t expect to go away anytime soon.

AFAC currently serves 2,007 families and 8,028 individuals, a 40 percent jump since July 2013 and a 37 percent increase in the last calendar year, according to Executive Director Charles Meng. Meng projects the nonprofit will exceed its $700,000 food purchase budget this year by $150,000.

Meng claims the increase is a direct result of two policy changes in Congress — the passage of the farm bill, which will cut more than $8 billion from the Supplemental Nutrition Assistance Program (commonly known as food stamps) over the next decade, and the end of long-term unemployment benefits. Both resulted in cuts that have affected millions of low-income and unemployed Americans, and both have come within the last eight months, he said.

“It’s a very clear cause and effect in my mind,” Meng told ARLnow.com this morning. “The reductions in the SNAP program took effect Nov. 1, and it was November that our numbers started going up. It was a reduction of about $36 per family of four. You and I don’t think much of $36, but when you have very little funds, that’s a significant reduction in your income. That’s what caused people to come here.”

Meng said AFAC is transferring funds from other parts of its budget to cover the food expenses until the fiscal year ends, and its board of directors has approved a budget with an additional $150,000. However, Meng said AFAC must increase its fundraising goals and efforts or it must begin tapping into its reserves.

“This is unlike a recession situation when we see people coming to us, and when the recession eases, they’d be leaving us,” he said. “We’re not seeing that, these are basically going to be our clients on a long-term basis because this is a structural change to the funding available from the feds.”

In a letter to the editor to The New York Times, the president and chief executive of the Food Bank for New York City, Margarette Purvis, pilloried Congress and President Barack Obama for allowing the cuts to pass along with the farm bill.

“Charities will not be able to step up and save the day,” Purvis wrote. “We expect — and should expect — more from our leaders in Washington when it comes to keeping Americans from going hungry.”

“At this point, financial donations are much more important,” he said. “The bottom line is, we can basically purchase three times as much food with one dollar as a family could in a grocery store. If we get the right funding, then we can purchase a lot more food.”