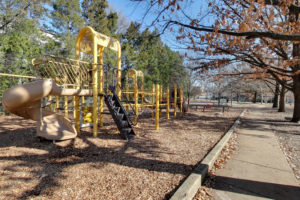 Woodstock Park in the Waverly Hills neighborhood could soon be getting a $700,000 renovation.

The County Board will vote Saturday on county staff’s recommendation to award a $644,000 contract to Fort Myer Construction Corporation, with a $64,000 contingency, to build a new basketball court, replace playground equipment and build a new walking path from N. Woodstock Street, along with other minor improvements.

The project was initially put out to bid in December 2013, according to the Department of Parks and Recreation’s staff report, but all the bids came in over budget. In response, staff removed an “embankment slide” playground element and the path and stairs to get there to bring costs down.

The renovations three-quarter acre park, located at 2049 N. Woodstock Street, were planned and designed as part of a community outreach program in 2012, staff said. It currently features a playground, basketball court, gazebo and “small grassy area.”