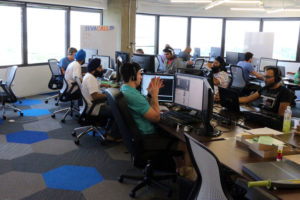 Manpreet Singh doesn’t need a long, explanatory speech to explain what the tech startup he founded with his brother, Gurpreet, does. All he needs is a phone call.

The Singhs are co-founders of SevaCall, based in Crystal City’s Crystal Tech Fund. In his demonstration, Singh goes to his company’s website and gives you an example of a service you may need. He pulls up “plumber,” inserts a location, time for the appointment and specific problem.

Within 90 seconds, the customer receives a call from, as in his example, the plumber, and the two can discuss terms. Fifteen seconds after Singh inputs the criteria, his phone rings with the test call, and he has the option to take the call — and pay SevaCall’s fee — or ignore it. Customers pay nothing, the merchants don’t receive the access to the customers’ information and, if the initial merchant and the customer don’t agree to terms, there will be two more waiting as backup.

“Finding a service provider is not efficient at all,” Singh said. “But with us, you literally can have three companies that have chosen to work with you, and you can be done with your task in 15 minutes.”

SevaCall has more than 50 “verticals,” Singh said, including heating and cooling, roofing, computer repair, auto repair and dentists. So far, the company has had requests in 8,000 zip codes nationwide, fielded 900,000 calls and interacts with more than 1,000 businesses a week. 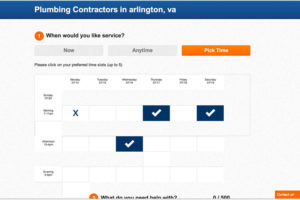 The company was founded in the fall of 2011, when Gurpreet Singh was operating his last business, Geeks on Site, and fielding a substantial number of phone calls from customers out of his service area. He had the idea to connect companies with their customers more efficiently, and the University of Maryland computer science grad started to build the beta.

“Many of the ways small businesses had to advertise were very inefficient,” Manpreet Singh said. “You don’t know who’s seeing what ad, and there’s never a good way to measure your return on investment.”

Manpreet Singh was working as an investment banker when his brother asked him to join his company full-time in 2012 when the website launched. In the beginning, getting companies to join the website — and customers to use it — was a struggle. Cold-calling companies asking them to sign up was both inefficient and ineffective, so the Singhs decided to use a composite ranking of location, quality based on social media and web ratings, and mined data from the webs.

“We have a two-sided marketplace, which is really challenging,” Singh said. “We started to mine our data and just put companies in our database, giving them their first call for free. The businesses were so happy they would call us right back after hearing the customers tell them where they heard about them. After that, we were able to build our network a lot faster.” 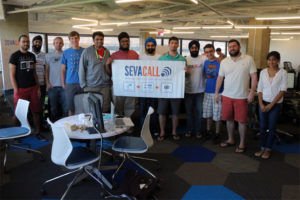 For the first six months of SevaCall’s existence, the founders funded it themselves before working on raising a $1.3 million seed round of funding. A new round of “significant” investment from Crystal Tech Fund and others is expected to be finalized soon, Singh said.

The company is currently developing a mobile app with voice-based technology that Singh said will increase repeat customers. The company has seven full-time employees among 16 workers including interns and contractors. After the next round of investment, Singh expects to grow even more, despite the fact that his company isn’t quite profitable yet.