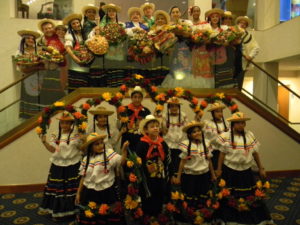 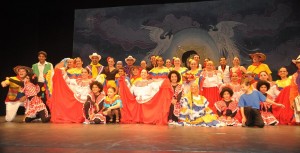 The dance ensemble El Tayrona will showcase “folklore in a passion of feelings,” at the annual Colombian National Day event at Gunston Arts Theater One (2700 S. Lang Street) this Saturday.

The event celebrating Colombian independence will start with Colombian cuisine from Restaurante Monserrate at 3:00 p.m. before dance performances begin at 6:00 p.m. The dances will depict Colombian folklore by reflecting its different regions, El Tayrona founder and choreographer Marta Chiari said. Some dances will embody the Andean region and the Pacific and Caribbean coasts.

This will be the 28th Colombian National Day event hosted by Chiari and El Tayrona, and it will include a new addition to the performance lineup.

The Colombian instrumental trio Confónica will perform for the first time in the event’s history. For the second year in a row, “Los Tayronitas,” the children’s ensemble of the El Tayrona dance group, will perform a dance routine and sing.

“All of them have been memorable,” Chiari said of the annual celebration. She and her mother have organized the events since the beginning after founding El Tayrona in 1981. “But they have been very special since the children have started performing.”

Colombia National Day celebrates Colombia declaring its independence from Spain on July 20, 1810, with the formation of the People’s Junta.

END_OF_DOCUMENT_TOKEN_TO_BE_REPLACED

More Stories
County Could Spend $500,000 on Oakgrove Park ImprovementsStartup Smackdown One Week Away in Crystal City