Theater critic Iain Armitage has never given a bad review. Even the shows that aren’t his favorites, he says he tries to focus on the “happy things” in the show.

Most would scoff at a critic who has never given a bad review, but Iain has an excuse: he’s only 6 years old, and he’s been taught it’s not nice to say mean things by his parents, Broadway star Euan Morton and theater producer Lee Armitage. 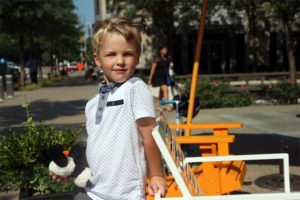 “I wish more critics were like him and didn’t give bad reviews,” Armitage said with a laugh.

Iain started reviewing shows on Armitage’s YouTube channel five months ago, reviewing 21 different shows include “Phantom of the Opera” and “Pippin” — his two favorites so far — and, most recently, the Signature Theatre production of “Sundays in the Park with George.” That review has more than 16,000 views and got Iain enough attention to be featured on MTV.com.

It all started when Iain saw Hairspray at Signature and started talking about it. Lee filmed him with her smartphone, and the rest is history.

“I really don’t know why it’s gotten so popular,” Armitage said. “With all the videos, we would have friends in the shows and they’d watch them because he said funny things. We also did it to keep up with what shows he’s seen.”

Iain is homeschooled at the family’s home near Virginia Square, and also likes ice skating, dancing (there’s a video of a dance recital on the YouTube channel) and playing piano. Although being an elementary school-aged theater critic is a rarity, he wishes it were more common.

“I wish there were more little critics like me,” he told ARLnow.com in Ballston this morning with his mother. “Then we could be friends and see the same shows and get famous together.”

Iain said some of his favorite shows are the ones he can watch his father — who was nominated for a Tony award in 2004 for his portrayal of Boy George in “Taboo” — because he likes “the feeling when my dad’s on the stage. If I wave to him after the show, he’ll always wave back to me.”

Armitage said the Signature Theater is a big part of why Iain developed a love for musicals — Signature Artistic Director Eric Schaeffer is Iain’s godfather — and Iain said he wished “more kids in Arlington could see shows.” Iain also wishes he could see more shows. He said he “would like to see every show ever made,” and has gotten frustrated when his parents kept him out of productions that are inappropriate for 6 year-olds, like “Hedwig and the Angry Inch,” a show about an East German transgender singer.

Iain said he’s “still mad” about not being able to see the show, but is enjoying the spoils of being a viral video star. He smiled and said “I like it” when he was asked about the trappings of fame, but couldn’t confirm he was practicing his autographs for future fans.