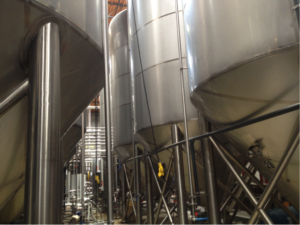 I spent last week on vacation visiting my best friend in Los Angeles. When we were planning this trip, I checked in with my friends at Stone Brewing Company
to see if anything interesting was happening, as my friend’s brother lives near Stone’s location in the Northern part of San Diego County and we were thinking about going to see the brewery and its vaunted World Bistro and Gardens.

It just so happened that I was landing the day before Stone’s 18th Anniversary Party. I’m not one to pass up an opportunity like that, so off we went.

Rather than simply open the Bistro and have a celebration of all things Stone and only Stone, the Anniversary Party is basically an all-day beer festival split into two sessions; one earlier in the afternoon and one later. Some sixty breweries were featured, with well over 100 beers available for sampling.

Tickets weren’t exactly cheap ($45 — and yes, I paid for them), but the price ensured a crowd of die-hard craft beer enthusiasts. I should compliment everyone involved in setting up and running the Anniversary Party; I can’t remember ever attending such a well-organized beer fest. 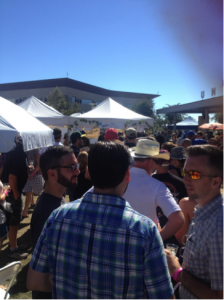 Make no mistake, though: it was a big crowd, and some breweries attracted a lot of attention. This (right) was the line I got into to sample what The Bruery brought to the party (their tent is the one straight ahead in the picture):

And the line for Russian River sampling was twice as long, but the pourers worked efficiently and lines progressed smoothly. Overall, very well done.

After the Anniversary Party on Saturday, we were treated to spots in a tour of the Stone brewery on Sunday, along with reservations at the Bistro (those I’ll thank Stone for). The brewery tour itself is… well, it’s a brewery tour — they’re all fairly similar.

I always enjoy brewery tours though, and at Stone I appreciated not only our knowledgeable and engaging tour guide, but the carefully selected samples poured for those on the tour immediately afterwards in the Stone Company Store.

There were a couple noteworthy items during the tour: The first, on the heels of my last column here talking about the issues California breweries are having with the state’s ongoing drought, was that Escondido — the North County area in San Diego where Stone is located–was under a boil alert the weekend we were there. Testing that Friday the 15th showed the presence of coliform bacteria, so the first thing we saw when parking at Stone on Sunday was a very large truck outside pumping clean water in.

By Monday the 18th, the alert had been lifted for all but around 60 of the reported 6,300 water customers in Escondido. While this issue in Escondido wasn’t drought-related, it was interesting to see how an operation their size had to scramble to handle a temporary water emergency. 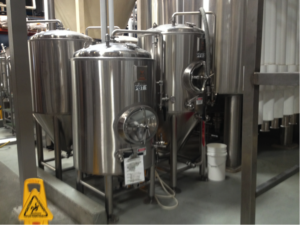 The other thing that came up on our tour was the news, released the day before the Anniversary Party, that Stone has narrowed the potential locations for its East Coast brewery to three finalist cities: Richmond, Norfolk, and…Columbus, Ohio? Ok, then — I’m still rooting for Virginia to get the nod (and rumors are flying about large spaces in both Virginia cities that could potentially work for Stone), and it sounds like we won’t have to wait much longer to find out for sure.

The Bistro is everything you’ve heard about it: a bit pricey but the food is delicious, with carefully chosen ingredients prepared very well. The draft and bottle beer lists are exceptional, featuring more than a few Bistro exclusives by Stone, along with cool unexpected Belgian selections and brews from Evil Twin and Mikkeller. My advice if you’re visiting? Grab a snack and a couple pints and enjoy a walk around the lovely outdoor area; I can imagine that as a really nice way to spend an afternoon. To wrap up this week, here are some highlights from the beers I tasted at Stone’s Anniversary Party — or in other words…

What I Was Drinking Last Week (West Coast Edition):

Stone Brewing Company stuff: Of course, there were a lot of Stone beers at the Party. I started the day with their 18th Anniversary Ale, which is just arriving in Virginia this week. A “Golden Brown IPA,” the malts make a nice counterpoint to the all El Dorado-hopped IPA. I’m partial to El Dorado right now; it always brings a nice, minty feel of freshness and a restrained amount of the citrusy/piney hop character that can be overdone in too many beers. Something I didn’t expect to see was Enjoy By 9.20.14., but it’s always appreciated. This batch won’t be hitting Virginia or D.C., but if you need your fix, it is available in Maryland. One I’d never heard of was Tiger Cub, a Saison in this case aged in white wine barrels with sour cherries. As you’d expect, opinions varied but I thought it was lovely. The new Coffee Milk Stout was great; not too strong, not overtly sweet, and if the six-packs ever get out here I’ll be stocking up on it for sure. My wife didn’t like the recently released W00tstout 2.0 as much as last year’s, but I found it to be just as punchy, rich, and enjoyable as before.

4 Hands Prussia Passion Fruit: I’d heard next to nothing about St. Louis’ 4 Hands Brewing before going to San Diego, but now I’m obsessed and it’s solely because of this Berlinerweisse with passion fruit added to it. It’s 3.5 percent ABV, tart as all get out, and the passion fruit just worked so well in the style. I must have it.

Russian River Compunction: Sure, most folks were waiting in the absurd Russian River line for Pliny The Elder, but many of us were intrigued by Compunction, a Sour Ale of theirs that I personally wasn’t familiar with at all. Turns out to be a Sour Blonde with pluots (a plum/apricot hybrid). I was looking for more fruit character, but Compunction does not disappoint–it’s a Russian River Sour, after all.

Ballast Point Grapefruit Sculpin: Sculpin is about as perfectly-made as West Coast IPAs get; this variant with grapefruit added is just a little more perfect. If we don’t get bottles (or cans? Please?) of this in Virginia it’ll be a travesty. Ok, that’s a bit strong, but I really would like to have some to sell. In the meantime, I’ve heard of bottles popping up in D.C., so keep an eye out.

The Lost Abbey Fuzzy Angel’s Share: I’ve only had Angel’s Share once or twice, so I don’t have a lot to compare it to, but this was wonderful. This version of Angel’s Share was made especially for the 18th Anniversary Party, adding black tea and stone fruit to the 12.5 percent ABV Brandy-barrel Strong Ale. Heady (especially as it was my last beer of the party), but so complex and just packed with flavor.

For more tasting notes and tales of my trip to L.A., check out my most recent blog post. Next week: a visit to The Bruery, and where to drink good local craft beer by the beach in Santa Monica. Until next time!