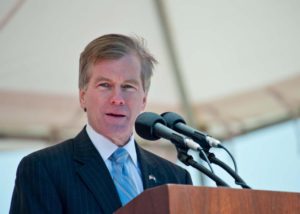 Former Gov. Robert McDonnell and his wife, Maureen, were both convicted on multiple counts of corruption in federal court yesterday, a day many public officials and political observers called a sad day for the Commonwealth.

The governor was convicted on 11 of 13 counts, including three counts of honest-services wire fraud and six counts of obtaining property “under color of official right,” for gifts and loans received from businessman Jonnie Williams.

Maureen McDonnell was convicted on nine of a possible 13 counts, for many of the same crimes as her husband.

The attorneys for both McDonnells said each would appeal their convictions. U.S. District Judge James Spencer set a sentencing hearing for Jan. 6, at which the estranged couple could independently face up to 20 years in prison and fines of more than $250,000.

The McDonnells and their family reportedly were crying as count after guilty count were read, with Bob McDonnell at one point burying his head in his hands while his daughters “sobbed” behind him, the Post reported.

Current Gov. Terry McAuliffe, who campaigned on ethics reform last year after the Washington Post brought the McDonnells’ improprieties to light, released a statement in the immediate aftermath of the verdict.

“I am deeply saddened by the events of the trial that ended in today’s verdict, and the impact it has had on our Commonwealth’s reputation for honesty and clean government,” McAuliffe said in the statement. “Dorothy and I will continue to pray for the McDonnell family and for everyone who was affected by this trial.”

Attorney General Mark Herring, who also campaigned on ethics reform and issued a gifts ban for his office when he was inaugurated, said he hopes the General Assembly “will move much closer” to the gift bans he and McAuliffe instituted.

“We have a long way to go to restore the public’s trust after this embarrassing and difficult period for the Commonwealth of Virginia,” Herring said in a press release. “If there was somehow still any doubt, it should be crystal clear that the people of Virginia deserve real ethics reform that will turn off the spigot of gifts, tickets, and trips that opens the door to abuse and undermines public confidence in our government.”

Some local political figures took to social media to largely express their dismay. While some may have expected Democrats to hail the verdict as a victory, no local leaders, at least in the immediate aftermath, gave any hints of pleasure after the jury’s ruling.

A very sad day for Virginia.

It's a difficult, sad day for Virginia. Let’s use this as motivation to restore our reputation, and to adopt meaningful ethics reform.

What a sad day f Virginia. The tradition of magnanimous public service has certainly been tarnished.

It's clear what the McDonnell's did was *wrong*, but that is different from illegal. Not sure how to advise people on gifts anymore.