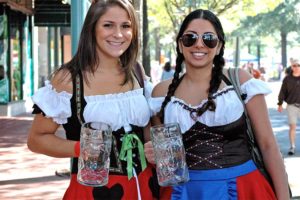 Lederhosen, schnitzel and steins of beer return to the streets of Shirlington this weekend.

Capitol City Brewing Company is hosting the 15th annual Mid-Atlantic Oktoberfest on Saturday from noon to 7:00 p.m. on Campbell Avenue. For $30 tickets, patrons 21 or older get a tasting glass and 10 tasting tickets. Further tickets can be bought for $1 each, with a $5 minimum. Beer taps will close down at 6:00 p.m.

Capitol City says more than 65 breweries will have booths, and more than half of those breweries come from the D.C. region. The list includes Virginia staples like Port City, Devil’s Backbone and Lost Rhino, with lesser known Northern Virginia breweries like Adroit Theory, Old Ox Brewery and Heritage Brewing Company. There will also be three cider makers and a “meadery” to offer some variety in the suds options.

There will be traditional German music being played all day and specialty German food to accompany the beer in honor of the Bavarian region’s centuries-old harvest festival.

Starting at 6:00 a.m., roads in Shirlington will be closed to allow the booths to set up, and they are expected to remain closed until about 10:00 p.m. According to the Arlington County Police Department, Campbell Avenue from S. Arlington Mill Drive to Quincy Street and S. Randolph Street between Charlie Chang’s restaurant and Arlington Mill Drive will be closed off. Drivers should also be on the lookout for “no parking” signs in the area.