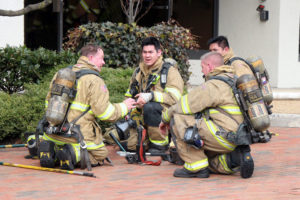 Thirteen Arlington County firefighters plan to run the Marine Corps Marathon this Sunday in full gear that can weigh up to 45 pounds.

The firefighters are running the 26.2 miles around Arlington and D.C. to raise money for multiple sclerosis after a firefighter named Josh — who doesn’t want his last name released for privacy reasons — was diagnosed with multiple sclerosis in June. Josh worked out of Fire Station 6 in East Falls Church with firefighter Jake Pike, who is organizing the run.

“Our brother Josh is the glue of our firehouse, the jokester, the infectious personality that always smiles and is always positive,” Pike wrote on the fundraising page for the National Multiple Sclerosis Society’s website. “In June 2014, our Captain came into the room with very solemn news. The glue of the crew and our brother had been in the ER all night and was diagnosed with MS.

“It is the only time I have heard our firehouse completely quiet. Not a sound from 12 strong A-list personalities was heard. The room went dead silent. At that moment you could feel that something left the room. It was devastating news. For the next few days each one of us grappled with the news, studied and read as much about MS as we could and some went home and cried. We were in shock.”

Pike told ARLnow.com today that a few weeks later, he and the other firefighters at Station 6 had resolved to run the Marine Corps Marathon to raise money for MS research and to support, as Pike called him, “our brother.”

“It wasn’t long enough to train for a marathon, but was kind of the perfect opportunity to do something,” Pike said. “We told him after the fact and he got mad at us because he didn’t want to draw attention to it. He’s a private guy, but I think he appreciates it. He’ll be there at the finish line for us.”

“None of us have run it before, and we’re not runners,” Pike said with a nervous laugh. “The biggest challenge for us is the weather. So if it’s hot and humid like it’s supposed to be, that’s going to be an issue. Then there’s the five-hour mark, you have the hit the [14th Street Bridge] in five hours or you’re not going to finish.”

Regardless of the result, Pike and his colleagues have already raised $5,630 for the MS society, and hope to raise even more Sunday when the tens of thousands of runners and spectators see the group of firefighters in full gear running alongside. A large contingent of the Arlington County Fire Department is expected to attend to support the group, and Josh.

“It’s really for the guy we wake up next to every day,” Pike said, “so hopefully it makes it easier for him.”

You can donate to their cause and help them reach their $30,000 fundraising goal here.

END_OF_DOCUMENT_TOKEN_TO_BE_REPLACED

More Stories
Your Beermonger: Raiding the Cellar, and Trying my HomebrewPike Morning Traffic Jams Likely to Persist for Six Months