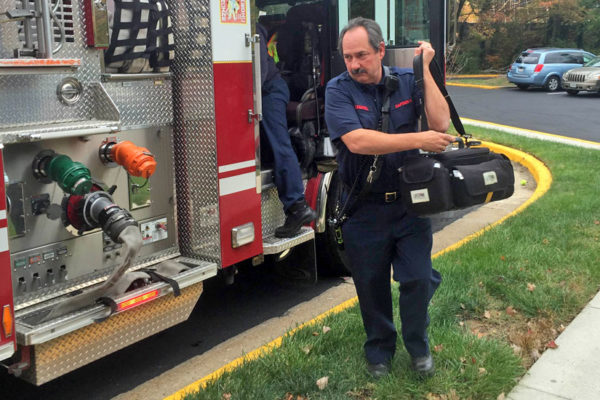 A quiet life of fostering potbellied pigs, llamas and alpacas on a farm in Prince William County is what lies ahead for Curtis Stilwell. What lies behind Captain II Stilwell is 33 years of service to the Arlington County Fire Department, including the last three as station commander for Fire Station 7 in Fairlington.

Station 7 is known as “The Little House” around the department, according to Fire Chief Jim Schwartz; it’s the smallest house and has just four staffers at a time on a single engine. It’s a small building that opens up right into the captain’s office, where there are plaques on the wall and trophies in a case for serving on Sept. 11, 2001, and for the station winning the 2006 Metro Fire Department Bus Rodeo.

When ARLnow.com visited Stilwell on his last day, he was relaxing at his desk, listening to the radio and reminiscing about old times with Capt. John Snyder, himself a 29-year veteran of the department. Stilwell said he wasn’t one of the people who grew up dreaming of being a firefighter. After serving in the U.S. Navy, he was going to school with money from the GI Bill and working at Sears, but wanted something more stable.

“I just needed a job with regular income and insurance,” he said. After 33 years, though, “I wouldn’t change a second or day of it. You see people at their worst and they thank you for helping them. It’s very humbling.”

Humbled is how Schwartz sounds when he talks about Stilwell’s devotion to charity work in his off time. He’s worked for years as a counselor at the Mid-Atlantic Burn Camp, a gathering place for burn victims to go meet other victims and “not feel so alone.” Stilwell has also been the treasurer of the region’s Aluminum Cans for Burned Children program for more than 20 years. 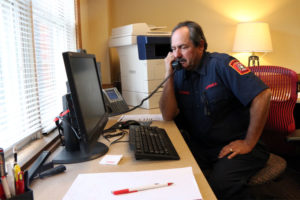 Stilwell’s stepdaughter is a burn victim, and his eyes start to water when he talks about his work with burn victims and their struggles. It’s far more emotional and personal for him than anything he discusses of being on the job for three decades, including working during Sept. 11.

“When you’re a burn survivor and have a significant injury, people know it,” he said. “A lot of these victims are kids and they just want to feel like they belong, like there’s nothing wrong with them.”

Stilwell’s wife, Renée, works in fire education for the Fairfax County Fire Department. Stilwell was taking care of his mother-in-law on the morning of Sept. 11, 2001 after working a shift, when he saw the news and called his wife, telling her he had to go to work. Renée soon joined him.

It would be two weeks until either of them returned home.

“I remember driving on I-66 and it was deserted, like a science fiction movie where everyone disappeared,” he said. “After we got there, they divided everyone into groups doing different things. We were assigned to go in with the FBI and assist with finding victims in the rubble. Not to be too graphic, but we were basically looking for body parts.”

Stilwell’s career started at Fire Station 3 in Cherrydale in 1981. He worked for years in the Fire Prevention Office, and that’s where he left his biggest mark on the county, Schwartz said, setting guidance in not only how the community could prevent fires, but how firefighters protected themselves.

“Early in my career, [Stilwell] was a firefighter with experience that helped to guide many of us who were new to the job,” Schwartz said. “Over time, as we progressed through the ranks, he became one of the guys I most relied on as one of my senior leaders.”

Stilwell laughs and shakes his head when thinking about how the job used to be. He was assigned to fire prevention, he said, because he had used a computer a few times in the Navy, which is more than most of the other firefighters in the department could say. The equipment, including fire trucks, have changed drastically to improve safety.

“When I came on, you didn’t see a lot of old firefighters because we were killing ourselves,” Stilwell said. “Now we think more about protection and fire prevention, and that’s changed drastically over the years.”

Stilwell has lots of time now to foster potbellied pigs — it’s his hobby to take pigs in after people who buy them as pets give them away because they can’t handle a farm animal that weighs several hundred pounds. There are 22 of them on his farm, along with the llamas, alpacas, sheep, goats, turkeys and emus, Stilwell said. His life will be far from boring.

Fairlington, however, will miss him.

“Curtis is not just someone who was a great representative of the fire deparment, but he had the community’s confidence,” Schwartz said. Tom Shamblin, a 27-year veteran of the ACFD, has replaced Stilwell at The Little House, but, as Schwartz said, “he has big shoes to fill in that community.”