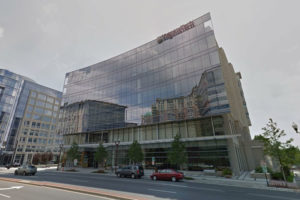 If you talk to enough people involved with the brand new VT Investor Network, based jointly out of Virginia Tech’s Ballston campus and Virginia Tech’s main campus in Blacksburg, the slogan “Hokies helping Hokies” doesn’t just sound like a phrase, it sounds like a mantra.

The network is the brainchild of Hokie alumni Jen O’Daniel, an early-stage investor with the state of Virginia’s Center for Innovative Technology, and Jonathon Perrelli, a serial entrepreneur. The network launched with a reception last week, including a keynote address from venture capitalist John May, the chair emeritus of Angel Capital Association and co-chair of World Business Angels Association.

O’Daniel told ARLnow.com at the reception that she and Perrelli had been talking about it for about three years before deciding to launch it this summer.

“We’d been looking and thinking Virginia Tech should really be doing this,” O’Daniel said, citing the University of Maryland’s Dingman Center for Entrepreneurship as a model. “I find myself saying all the time that we have this powerful network of alumni trying to seek out which Hokies are in their industry.”

The network is not a fund like the CIT Gap Funding program O’Daniel works for as her full-time job. Instead, it’s a method of connecting Tech alumni who want to invest in startups led by other Tech alumni. Some of the startups founded by Tech alumni include Facebook fundraising company Heyo — which recently raised $2.5 million, according to VT Center for Innovation and Entrepreneurship Director Derick Maggard — Lawnstarter and VirtualYou. 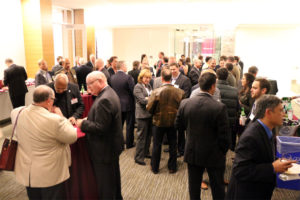 The VT Investor Network will take pitches from Virginia Tech students, graduates and faculty, Maggard said, and refer them to either specific investors in the network, or an advisory board with take them under consideration and, if the business idea passes muster, the board will pass it on to the rest of the network.

“We’re all going to screen deals together,” O’Daniel said. “It will be modeled a little bit after NextGen Angels… that’s the right size group. Sixty to 80 active angel investors can really make a difference.”

Maggard launched the Center for Innovation on the Blacksburg campus just four months ago, and the VT Investor Network is one of his first major initiatives. Once the idea started to make the rounds around alumni circles, he said “my phone has not stopped ringing.”

“It’s crazy how amazing the alumni network is,” he said. “I have over 177 messages from Hokie alums saying ‘how do I get involved, how do I help with this?’ The cool thing is the Hokie network knows we have startups that are producing and are very successful, and they know there are more to come and they want to be there to help support them.”

Maggard anticipates the network to largely invest in high-tech companies, simply because those are the kinds of companies that Tech students have produced. That plays perfectly for Arlington, which has both the base of the Virginia Tech Research Center and a massive base of Tech graduates that moved here after graduating.

“The pipeline in the National Capital Region is massive,” Maggard said. “You think about what it will do for Blacksburg and Arlington as the communities for Virginia Tech, it’s amazing. It’s going to do some incredible things when it comes to this economy.”