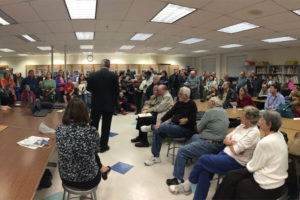 The Lyon Park Community Center is set to break ground on its million-dollar renovation next weekend, but the community is divided about plans to pay for the construction.

Last night, 265 Lyon Park residents attended a meeting of the Lyon Park Citizens Association — a record, according to LPCA President John Goldener — to vote on whether the community center should take out a $600,000 line of credit to help fund the renovation.

Put up as collateral for the bank: the park and community center itself.

After a spirited debate, 121 voted to let the Lyon Park Community Center Board of Governors take out the line of credit, with 114 voting to proceed with the renovations, funded only by donations. The LPCA has been fundraising for five years, according to treasurer Bill Anhut, but they have raised $450,000, far from the organization’s goal.

“It’s been apparent the costs were going to come in higher than we expected, and fundraising was lagging because the process was taking so long,” Anhut said. The LPCA has been discussing renovating the Lyon Park Community House, built in 1925, for more than a decade. “People were wondering if we were ever going to get to the point where we put the shovel in the ground.”

A group of residents has circulated a flyer in the last month asking residents to vote in the motion against taking out the line of credit. The flyer reads, in part:

“Repaying the loan will cost $680,000-$800,000, primarily from new donations, from YOU or else LYON PARK COULD BE LOST TO FORECLOSURE … the community center risks default and the bank could take over operations.”

Even if the LPCA can’t repay the loan, Anhut said, a few residents have volunteered to be guarantors on the loan, meaning if something changes with LPCA leadership and the association decides to stop making payments, the residents would step in to cover the expenses.

The only reason the bank asked for collateral, Anhut said, was to protect its investment and prevent the LPCA from getting more money from another bank.

“The bank proceeded with the loan and understands they can’t look to the property to satisfy any default,” Anhut said. “The bank knows that if they were to foreclose on this property, the deed has a stipulation that it will forever remain a park. It cannot be changed.”

The flyer passed out also suggests undergoing a more modest renovation with the cash on hand, asking “why can’t a sunroom be built in a second phase?”

Goldener dismissed the notion that the renovations are more than the facility needs.

“There’s a misperception that the cost of this is a gold-plated facility and it’s not,” he said. “The reason it’s expensive is because we have to do completely redo all the plumbing, electrical, ADA accessible entry, exits and handicapped bathrooms, and the kitchen’s a commercial kitchen, so all of the costs are essentially triple what they would be for a home renovation.”

Goldener said the community has run a number of financial models, and the LPCA anticipates “easily” paying back the sum of the loan, with interest, within 10 years. The citizens association will also continue to fundraise during the renovations, and the organization will only dip into the line of credit when it runs out of cash on hand, Anhut said. When the renovations are complete, donations and rental fees will combine to go toward paying back the credit.

Lyon Park is holding a groundbreaking ceremony for the renovations on Saturday, Nov. 22, at 4:00 p.m. The community center is located at 414 N. Fillmore Street. The renovations are expected be complete by next summer