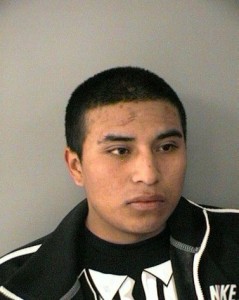 A 20-year-old Maryland resident was arrested in Arlington’s Buckingham neighborhood Saturday night after police say he attempted to rape a 16-year-old girl.

At about 11:00 p.m., Daniel Cabrera, of Hyattsville, Md., was taken into custody after police say he tried to rape the teen on the 4200 block of 2nd Road N. The victim escaped and screamed, and was overheard by neighbors and a police officer. Responding officers apprehended Cabrera at the intersection of N. Piedmont Street and Pershing Drive, after the victim identified him at the scene.

The victim told police Cabrera was “watching” her as she worked in the area on Saturday, according to Arlington County Police Department spokesman Lt. Kip Malcolm. As the victim walked home from work later that night, Cabrera approached her from behind, pulled her hair and covered her mouth, police said.

“He pulled his pants down and attempted to pull her pants down,” Malcolm told ARLnow.com. “She bit his hand and was able to secure her escape.”

Cabrera was denied bond at a magistrate’s hearing, and is currently being held at the Arlington County Detention Center. Malcolm say Cabrera has no record of sex crimes, but police are asking anyone with information about the incident or similar incidents involving Cabrera, to contact the Special Victims Unit at 703-228-4244.