Two North Arlington teenagers want to help Arlington residents with the hardest part of the holidays: setting up the Christmas tree.

Duncan MacBride and Sam Gonson are sophomores at Gonzaga College High School in D.C. and they are first-time entrepreneurs. Duncan got the idea to start their fledgling business the day after Thanksgiving, setting up his family’s tree with his father.

“My dad and I were setting it up and saying ‘this is not fun. This is difficult,'” Duncan said. “I texted Sam to say I have this idea about setting up people’s trees for them. I figured, I don’t enjoy doing it. It’s hard to set up a tree, I figure most people probably go through the same thing.”

Sam and Duncan have been friends for a year and a half, and Sam said he was immediately on board with the idea. The spent the following week coming up with a business plan, price points and making marketing materials. A week later, they installed their first tree. 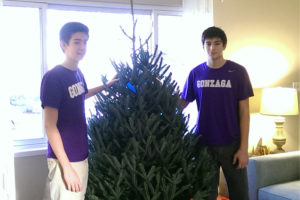 The duo charges $20 to take a tree from someone’s car into their home, set it up in the stand and hang lights over it. They also hang lights around the house for $15, and charge $10 per hour if their work takes more than one hour.

“We tried to figure out something that was reasonable but not over the top,” Duncan said. “We’re trying to help people, not rob them.”

So far, the pair has set up a handful of trees in North Arlington, but they acknowledge they got a late start this year. With at least two winters left in Arlington before they go to college, this is, for them, more of a testing season.

“This year we’re trying to lay a base,” Duncan said. “Hopefully next year it will turn into a real thing.”

Next year, Sam says they plan to donate 20 percent of their proceeds to the Father McKenna Center, a food shelter affiliated with Gonzaga.

Most people with trees only set up their seasonal decorations once a year, but Sam and Duncan have already learned tips to make their jobs easier.

“Always check the lights before they’re up,” Sam said. “Put them closer to the inside of the tree so you can’t see the cord. Make sure the tree is properly balanced in the stand, and leave enough room at the top for the star.”

The two are also learning how to deal with clients and handle transactions. While they’re expecting business to pick up next year, they’re also prepared for a potential boom in the week leading up to Christmas, when many families buy and decorate their trees at the last minute.

Those interested in Sam and Duncan’s services can email them at duncan.macbride@gmail.com and samwgo@gmail.com.