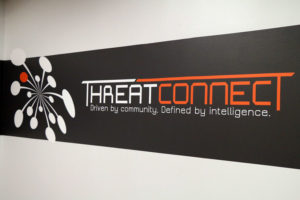 (Updated at 1:55 p.m.) One of the most promising companies in the cybersecurity space is based in a small office in Shirlington, where it helps Fortune 100 companies protect themselves from hackers.

ThreatConnect, which changed its name from Cyber Squared in November after it received $4 million in funding, formed four years ago, and launched its data security software platform in August 2013. In the year and change since, it has grown to serve 650 companies, 3,300 users and “40 of the Fortune 100 companies,” CEO Adam Vincent told ARLnow.com last week.

ThreatConnect is poised in the coming year to add more than 50 jobs and move to bigger office space. Vincent says he wants to stay in Arlington because, he says, “I live here. I like it here.”

The company started in 2011 when Vincent and three co-founders — Chief Intelligence Officer Richard Barger, CFO Leigh Reichel and Product Director Andrew Pendergrast — left their jobs in the cybersecurity industry to start their own company because, as Vincent said, they were “frustrated private companies couldn’t protect themselves against hackers.”

“These hacker groups are like if Navy SEALs showed up at your office building,” Vincent, a lover of metaphors to explain his complicated industry, explained. “There’s not too many buildings that can protect themselves.”

Cyber Squared launched consulting for private businesses on cyber security to pay the bills while they were bootstrapping themselves and building out their ThreatConnect platform. The platform allows companies to sign up for free and connect to other companies’ data, to give them more information when combatting cyber threats. The more companies that sign up, the more powerful the tool becomes. 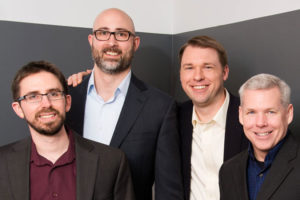 Security is very “silo-ed,” Vincent said, and when the data each company acquires on threats can’t reach each other, each company’s defenses are weaker because of their lack of knowledge

“We built a brain in the network,” Vincent said. “They already had the arms and legs. We connect them.”

Vincent also compared each company to a section in the orchestra, and compared ThreatConnect’s software to the conductor. “I don’t know if you’ve ever heard an orchestra without a conductor, but it doesn’t sound very good.”

And while the sound of cellos not playing from the same music as tubas doesn’t sound appealing, it doesn’t come close to describing the attack companies — and their customers — have come under since ThreatConnect launched.

More than 40 million Target customers had their data hacked on Black Friday in 2013. JPMorgan Chase was hacked in summer 2014, affecting 73 million families, according to the New York Times. And, most recently, Sony Pictures was hacked in a suspected cyber attack from North Korea, prompting it to not release its movie, The Interview, as planned.

Every time one of those major hacks has occurred, ThreatConnect’s phone lines have started ringing, Vincent said.

“All of our brands are constantly under attack,” he said. “We’re in a world today where people are going to take what they want via cyber and it’s happening around the world. This is a sophisticated operation. It’s important we figure out a way as a market to solve it.” 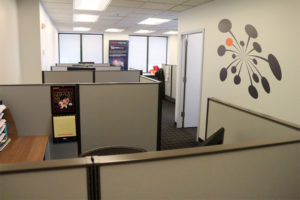 It’s third option “On-prem” targets the “biggest of the big” companies, offers them “analyst on-demand service” — which Vincent described as “tele-medicine” for cybersecurity.

There are less than 50 paying ThreatConnect clients at this point, but that’s where Vincent expects the boom to happen this year. To help grow that side of the business, ThreatConnect announced today the hiring of its first vice president of sales, Matt Brenner, formerly of SourceFire, acquired by Cisco Systems for $2.7 billion.

“The market is just now starting,” he said. “We believe we have a massive opportunity to sell to the masses.”