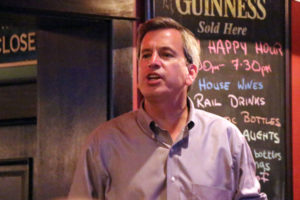 Del. Rip Sullivan (D) has already filed 16 pieces of legislation, and his first session in the Virginia General Assembly is just hours old.

One of his biggest priorities after being elected in August to replace Del. Bob Brink (D) will be reforming the process by which Virginia draws its districts for both state and federal legislatures. Sullivan’s legislation, HB1485, would follow through on recommendations made by a state government integrity panel last month.

Although a long-shot in the Republican-controlled Virginia General Assembly, Sullivan’s bill calls for redistricting to become a nonpartisan process.

Every 10 years, after a new U.S. Census, state legislatures redraw their district maps to align with the population changes. Often, these districts are drawn in a way to include certain blocks of voters with one another in order to gain seats in Congress or the General Assembly. The problems are not unique to Virginia, but they might be worse here.

In October, a three-judge federal court ruled that Virginia would have to redraw its congressional map after it ruled it was drawn to include too many black voters into Virginia’s 3rd District.. The court gave the state until April 1, 2015 to redraw its map, but the case has been appealed to the U.S. Supreme Court.

“This legislation will go a long way toward creating legislative districts that are truly compact, contiguous and respect political subdivision boundaries,” Sullivan said. “By reducing the role of politics, we will establish a redistricting process that is fair, transparent, and takes into account the interests of the citizens of the Commonwealth. Voters should choose their legislators, not the other way around.”

Sullivan’s legislation appears unlikely to pass; after the state’s panel — co-chaired by former Republican Lt. Gov. Bill Bolling — ruled the process should be changed, House of Delegates Speaker William J. Howell told the Washington Post through a spokesman that he would resist redistricting reform.

“I’d like to think people come down to vote for what’s best for Virginia rather than what’s best for themselves,” he said just hour before his first regular session. He said he senses “real traction” from some Republicans on the measure. “The fact that redistricting affects my [district’s] lines ought to be way down the list of concerns for someone down here.”

If the Supreme Court decides to overturn the lower court’s decision, Virginia’s electoral map would be redrawn in 2021, after the next census. A statewide organization called One Virginia 2021, which claims to have members from across the political spectrum, has endorsed Sullivan’s legislation.

“Delegate Sullivan’s legislation takes a major step toward ending gerrymandering  in the Commonwealth,” Greg Lucyk, the president of One Virginia 2021, said in a press release last week. “Gerrymandering eliminates competition in elections, increases voter apathy, and promotes polarization and gridlock.”

If passed, the bill would prevent the use of election data in redistricting, except to ensure “racial or ethnic minorities can elect candidates of their choice.” It would create a nonpartisan panel to look at population size, makeup and communities of interest when redrawing the maps.