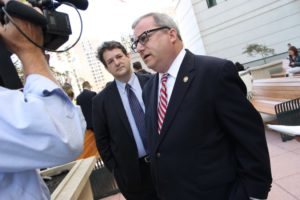 With former Gov. Bob McDonnell starting to serve a prison sentence on Feb. 9 after being convicted of federal corruption charges, Arlington’s state legislators are taking aim at the state laws surrounding political gifts.

Sen. Adam Ebbin (D) has introduced SB 1289, called the State and Local Government Conflict of Interests Act. If passed, the bill would establish an independent commission on ethics, which would review all government disclosure forms, conduct random audits of legislators and grant waivers for certain gifts. It would also limit “tangible” gifts to $100 and intangible gifts, like flights and meals, to $250.

“Having a commission gives real teeth to our efforts and shows we’re serious about enforcement,” Ebbin said yesterday. “I’ve been working on this for a few years, for common sense ways to increase transparency and to penalize things that are beneath the standards of our public officials.”

McDonnell and his wife, Maureen, were convicted of receiving more than $177,000 in impermissible gifts from a high-profile donor, and the former governor and attorney general was sentenced to two years in prison. Despite the conviction, McDonnell wasn’t charged with corruption in any state case.

ARLnow.com spoke to several Arlington state legislators yesterday, and all of them pegged ethics reform as the biggest issue the General Assembly will face in its 2015 session. McDonnell’s conviction has helped drum up efforts for reform on both sides of the aisle.

“I’m confident there will be bipartisan support for increased reform, it’s just a matter of the details, and I’m a pretty detail-oriented guy,” Ebbin said. “I’m going to work hard to make sure the most effective elements of this legislation are adopted, I’m going to do everything in my power.”

Ebbin says his bill would aim to curb “unlimited dinners” for lawmakers and “private jets to golf tournaments,” which he finds “reprehensible.” There would be opportunities for public officials to get waivers if trips are educational or fact-finding, he said.