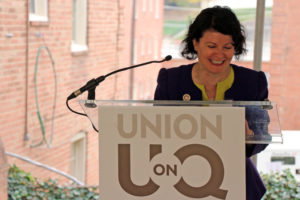 State Sen. Barbara Favola has introduced a series of bills aimed at regulating the in-home child care industry in Virginia.

Her bills — SB 780, SB 818 and SB 898 — would require everyone who receives compensation for child care in their home to be licensed with the Department of Social Services, undergo background checks and include their own children in official counts of how many children are under their care.

Currently, only homes caring for six or more children must be licensed by the state as a child care provider. If Favola’s bills pass in the Republican-controlled General Assembly, all employees who are alone with children would also have to receive first-aid training and ensure the home is clear of fire hazards.

“We should give families some assurances that there’s some standard of care,” Favola told ARLnow.com this week. “Right now the law reads if you have five unrelated children, you’re not regulated. This would require all day-home providers to meet minimum standards, like CPR, background checks and house fire safety code.”

The bills are currently in the senate’s Committee on Rehabilitation and Social Services, which met this morning. Favola is hoping that she can draw support from across the aisle to win some form of child care legislation. Favola’s colleague in the senate, Sen. Adam Ebbin, thinks she may have a chance.

“Daycare is going to be a significant issue to see progress on,” he said.

Favola called her bills “baby steps” at this month’s Arlington County Democratic Committee meeting, but she said she wanted to introduce legislation she felt could pass. Gov. Terry McAuliffe said in December that daycare is an issue he wants to see progress on in 2015. According to an editorial in the News Leader in Staunton, Va., 46 children have died in unlicensed daycares in Virginia since 2004.