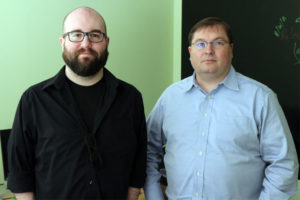 Robert Melton is a software developer who has built command centers for the FBI and local law enforcement agencies, but eight months into his latest project, building software for patent lawyers, he said “we were a complete failure.”

“It was a really hard year,” Melton admitted from his office at Clarendon’s Link Locale.

Melton has since turned it around, and he and founder Jay Guiliano are less than two months from launching Patdek, which they hope will be a game-changer in patent law, and potential the entire legal industry.

The concept appears simple: give patent lawyers a tool to find relevant information in patent applications and cases, both current and past, and a way for them to easily share it with clients and colleagues. The concept is so simple, in fact, that when Guiliano pitched his startup idea to Melton, asking him to be his developer, Melton thought for sure something like it already existed.

The Patdek team says nothing brings together the content of patent cases — terabytes worth of data comprising hundreds of millions of documents, all in Patdek’s system —  with the tools to search them easily in a usable way.

“These massive companies have the capabilities to do it,” Melton said. “But they don’t have the motivation to build a holistic tool like this for a niche market.”

The biggest challenge, Melton said, was avoiding converting the documents to text, something that would make them unusable for lawyers, who hold original documents sacred. All of the documents in Patdek’s system are images of the original, meaning a lawyer can take a paragraph from a patent case, highlight the text, send it to a colleague with the information and it can be used worry-free in court.

Guiliano knows how useful and how powerful the tool could be if executed properly. He’s been a patent lawyer for 19 years, and is still in practice challenging patents at his day job, and he’s been the driving force behind Melton’s seemingly ever-increasing workload. 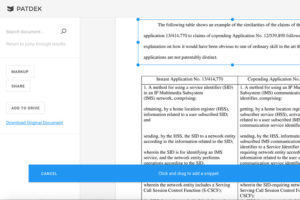 “Jay is someone with a clear vision of where he wanted to go,” Melton said. “After eight months, we couldn’t select text or highlight characters. Jay said, ‘We need that. It’s super frustrating using other apps that have that. I don’t want to be frustrated.'”

Why is it so important, and so frustrating not to have? Guiliano said, as a lawyer, he needs to be able to answer questions about cases quickly. Right now, there’s no easy mechanism to do that.

“I want to be able to set up a case in five minutes,” he said. “That’s our goal. How do we take out all the time leaks and make it smooth and easy to do?”

Eight years ago, he knew he wanted to solve this problem, but only in late 2013 did he decide to get the ball rolling to do it himself. That’s when he reached out to Melton, a self-described “gun-for-hire” developer, to help him build it.

Now, less than two months away from their expected launch, the gun-for-hire and the attorney realize they might have something even bigger on their hands than a niche patent software tool.

“We see a lot of markets for this because we accidentally built a platform,” Melton said. “Everyone wants to use the app in different ways.” 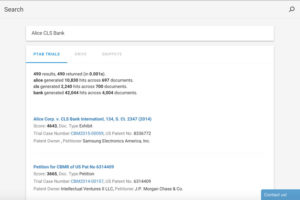 First things first, however, is making sure it hums along for its intended purpose. And while patent law sounds like a niche market, it’s still a massive financial opportunity. Guiliano says 300,000 patent applications are filed a year, and Patdek has every document associated with all of them.

“We’ve ingested almost 9 million patents from the first one up to last week,” he said. “There are 15 to 16 million documents. Some are 800 pages long, some are 20-40 pages long. Every patent trial, petition and appeal has an application number. We can track all of that.”

With Guiliano’s contacts in the patent law industry, he knows the demand is real and immediate. The beta version will be offered for free, but “once it works to general satisfaction, people will have to pay.”

Melton and Guiliano are still debating the price point for their platform — either $149 and $179 per month — but whenever it’s live, they think that more than a year of brutal thankless work will pay off in a big way.