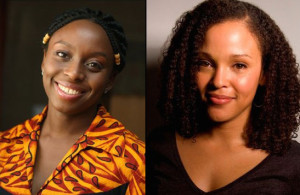 (Updated at 5:10 p.m.) It was the rallying cry on social media for activism after nationwide protest surrounding several police shootings and now it’s Arlington Public Library’s theme for Arlington Reads 2015: the hashtag #BlackLivesMatter.

The community-wide reading initiative focuses on race, according to a library press release, in two books: “Men We Reaped,” a memoir surrounding the deaths of five young black men close to author Jesmyn Ward, and “Americanah,” a novel about African emigrants struggling with race in Western civilization by Chimamanda Ngozi Adichie.

Arlington Reads is the library’s annual attempt to bring the community together around a single topic, to encourage reading and educated discussion. This year’s theme was selected because the #BlackLivesMatter hashtag was chosen as the American Dialect Society’s Word of the Year in 2014 after police-related shooting deaths in Ferguson, Mo., Cleveland, Ohio and elsewhere in the country.

The two authors will discuss their books — both published in 2013 to broad critical acclaim — in separate events at Arlington Central Library.

Ward, a professor at Tulane University, will speak at Central Library on Wednesday, April 8, at 7:00 p.m. Adichie — known also for her TED Talk “We Should All Be Feminists” and her speaking part on Beyoncé’s song, Flawless — will speak at 7:00 p.m. on Thursday, May 7. Admission to the events are free.