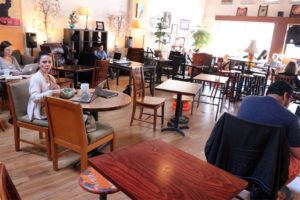 A Monday in Boccato Gelato & Espresso in Clarendon looks vastly different now than it did two months ago, thanks to a new Arlington startup called Cowork Cafe.

Founded by David James and Ramzy Azar, Cowork Cafe is a partnership between the two entrepreneurs and Boccato (2719 Wilson Blvd) owner Christian Velasco in which James and Azar rent out Boccato’s lounge for 9 hours on weekdays, and offer it to members for $200 a month. Those members get souped up WiFi, $50 in food and beverage credits, soundproofed phone booths and, soon, personal lockers for storage.

From 9:00 a.m. to 6:00 p.m., Velasco puts stanchions through Boccato’s lounge separating a dozen or so tables — including bars that function as standing desks — for Cowork Cafe members, and keeping a small handful for walk-in Boccato customers. During the cafe’s busiest times in the evenings and on weekends, the stanchions are removed and it’s a full-fledged coffee and gelato shop once more.

“I totally understand the challenges of a food establishment; it’s dependent on volume,” Azar told ARLnow.com over coffee at the cafe. His parents own restaurants, he said, which is party of why old friend James asked him to cofound the venture. “As soon as I understood what coworking was about, it seems like a great way to contribute to the establishment.”

James came up with the idea after years of working at home as an independent software developer left him feeling “a little isolated.” He ventured to coffee shops with his laptop, but those started to become too crowded, too noisy and too distracted. Walking by Boccato’s empty lounge space on a weekday spawned the idea. 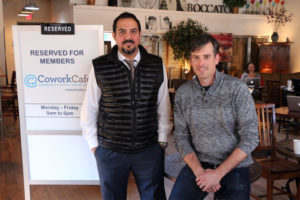 Now, Cowork Cafe has 20 paying members, and two other restaurant businesses have reached out to become the home of the next Cowork Cafe.

“It’s something that could be a lot bigger than here,” James said. “We’re excited about the ability to scale quickly. Restaurants already have space, and we can just plug in and go. That means we can try out a place with low risk.”

Of course, some might raise their eyebrows at the idea of charging $200 a month to work in a space that was previously free, but James said the advantages to membership and the price hit a sweet spot for teleworkers and self-employed professionals.

“Most of the people that work here don’t need to go to a place to work,” James said. “But people can see the benefit of being around a community. If you haven’t worked form home a lot, it’s probably hard to understand.”

The 20 members are a hodgepodge of writers, developers, self-employed professionals and teleworkers, James said. Some have routines and come in most of every weekday. Others float in and out and use it more like a regular coffee shop. With the $50 in food credit, any member can go to the counter and get a coffee or empanada without taking out their wallet; Azar called it a country club-like system.

“Self-employed folks come to these spaces anyway,” he said. “It’s not an office. It has a rustic feel and a great sense of community.”

“A place like this encourages abstract thinking,” James added.

James and Azar didn’t just show up and launch the cafe on Feb. 2 — they put in some key infrastructure, like four soundproofed phone booths for phone calls and video conferencing. James said they installed about 50 plugs and business-class WiFi. They also didn’t quite know what to expect — they put a sign on the retail storefront on Wilson Blvd, held a few open houses and hoped for the best.

The expansion plans are underway sooner than either expected, but James and Azar aren’t saying yet where or when the next Cowork Cafe will be.