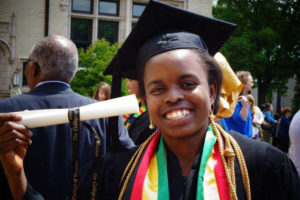 (Updated at 2:55 p.m.) A 26-year-old Arlington woman was killed in Northeast D.C. early Sunday morning, when the driver of a car in which she was a passenger slammed into a parked tractor trailer.

Nancy Tinoza, an immigrant from Zimbabwe, was killed in the collision at about 3:12 a.m. on the 3400 block of Eastern Avenue NE, according to the Metropolitan Police Department. She was pronounced dead after being transported to the Washington Medical Center’s trauma center.

The driver of the car and another passenger were also hospitalized, and after officers interviewed the driver, Momodu Bello, they arrested him and charged him with second-degree murder.

According to the criminal complaint filed in D.C. Superior Court, Bello, a 35-year-old Fort Washington, Md. resident, was intoxicated and speeding on Eastern Avenue, which has a 25 mph speed limit. According to police, Bello said he had two beers and a shot of Hennessy at Club Mango in Bladensburg, Md., before driving, and “thought that the truck was moving.”

Bello was driving a Volkswagen Passat, which “submarined” under the truck during the collision. Tinoza suffered “massive blunt force trauma” to the head and was rendered unconscious.

“[A witness] saw the defendant had dragged [Tinoza] out of the vehicle by her arms and began shaking [her] violently when she did not respond to the defendant’s attempts to speak with her,” the complaint reads. “At one point, the defendant dropped the unconscious decedent, causing her head to strike the asphalt pavement.”

Bello was denied bond at an arraignment hearing yesterday, District of Columbia U.S. Attorney spokesman Bill Miller said in an email. His first preliminary hearing is on Friday.

Tinoza worked as a research assistant with the International Monetary Fund, according to her LinkedIn profile, and graduated from the College of Wooster in 2012 through the U.S. Student Achievers Program (USAP), which places international students in U.S. colleges. The program has set up a fundraising page to support her family in Zimbabwe — as of 1:30 p.m. the page has raised $8,483 of a $20,000 goal.

“We are saddened and devastated by this loss — she will be remembered for her kindness, energy, optimism and brilliance,” the USAP wrote on the fundraising page. “She was a role model to many, and full of promise and potential. She will be greatly missed by her family, friends, and all she has touched.”