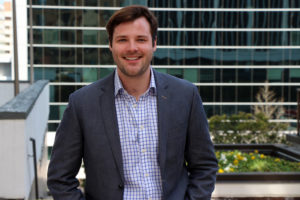 As more and more news websites are embracing paywalls — restricting access to online content to those who pay a subscription fee — one Arlington startup is trying to break them down.

Lucien Zeigler and co-founders William Treadway and Christian Zeigler (Lucien’s brother) founded Outl!t for just that purpose. Zeigler works for the Saudi-U.S. Trade Group and compiled a daily newsletter on U.S.-Saudi business interests. His credit card bill showed he was spending more than $100 a month, simply for access to a variety of newspapers.

“Paywalls are becoming more and more common, and they’re essentially roadblocks for consumers,” Zeigler told ARLnow.com last week. “I thought, why can’t readers pay very small amounts of money, double or triple what advertising would pay, to get access to paywall content?”

Starting next month, readers can. Outl!t will be available to the public under the idea that readers can pay for what they read and nothing more. A user will launch an account with a set amount of money. Outl!t partners with news organizations to bring them content, and, if the content costs money to read, pennies will be deducted from the user’s account. Most stories will cost 1 to 5 cents, Zeigler said, unless they’re free or exceptionally long.

“We’re anti-subscription,” Zeigler said. “We feel those are really inefficient. You’re essentially paying for a lot of content you’re not really getting to see. You can see more if you don’t have to pay bulk subscription costs, you can just get things à la carte.”

The function of à la carte news reading is just one plank of the Outl!t platform. It will also allow independent writers to publish on their own, and allow readers to see their work for free, or for a fee. Zeigler said eventually he plans on launching original content, produced by Outl!t staffers, to add to the mix of voices users can find.

Zeigler said he’s loath to use the “disrupt” buzzword, but he thinks that’s exactly what Outl!t is capable of doing to the news industry. 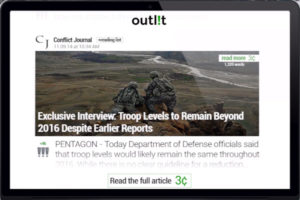 “We took a look at the media industry in general, used a lot of open data and what we saw was an industry that was spiraling downward pretty quickly,” he said. “We thought we needed not just a Band-Aid, but a totally disruptive type of solution, where we rebuild everything from the ground up.”

There will be no advertisements on the network, and each user can choose which news outlets stories will appear on their home page. After seeing the headline and first line of text or so, readers can decide whether they want to spend the money to read the full article.

Customers can join for free on Outl!t’s website now in anticipation of the company’s launch next month. Their initial deposit will be matched to encourage more use and demonstrate the product’s viability.

Although making money is the goal of any new business, Zeigler is a lover of news and passionate about the potential for Outl!t to reverse the downward trend of the industry. The company is based out of Zeigler’s Arlington home, but it will be looking for Arlington office space soon.

“Just like iTunes did with the music business, we aim to provide marketplace efficiency for providers of all sizes, from the largest newspapers to the blogger, writer, or journalist that has something of value to contribute to the world,” Zeigler said. “That’s our goal with Outl!t — to level the playing field in this business.”