South African comedian Trevor Noah will succeed Jon Stewart as host of The Daily Show, and next week he’s coming to Arlington. 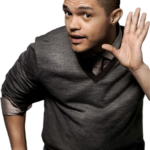 Noah, 31, is scheduled to perform seven shows at the Arlington Cinema and Drafthouse starting Thursday, April 9. He’s set to perform two shows apiece on Thursday, Friday and Saturday and one show on Sunday, April 12. As of this morning, all of the shows are sold out, according to the Drafthouse’s website.

Noah has been a Daily Show correspondent for two months on the show, but according to his biography on the Drafthouse’s website, he’s performed sold out shows across the globe, discussing everything from his upbringing in South Africa during Apartheid to the American “sports industrial complex.” It was announced this morning that Noah has been tapped as the Daily Show’s new host.

Noah is currently wrapping up a tour of the Middle East. He performs in Oman — the country bordering Saudi Arabia and Yemen — tomorrow.