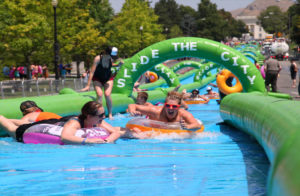 A giant slip and slide event — which closes several blocks to install a 1,000-foot-long water slide — is eyeing Arlington for an event this summer.

Slide the City brings the gigantic vinyl slide to cities around the country and charges between $15 and $60 for participants to slide in their own inflatable tube down closed-off roads and parks. On the event’s website, Arlington is listed as a site for Saturday, June 27.

Utah-based Slide the City is in the process of acquiring a special events permit to run the event and has yet to set a location within the county. We’re told that the June date is not final, and that it may ultimately be scheduled for as late as August.

Event organizers have been using elevation maps to try to scout out the best place for the slide, and have discussed locations in Rosslyn, Clarendon and elsewhere, we hear. No decision is made, and no permit is expected to be granted until May at the earliest.

Participants have the option of booking one slide, three slides or unlimited slides. All get a mouthpiece, a temporary tattoo and a drawstring bag. Those interested can sign up for a mailing list to be updated on Slide the City’s progress, including when registration opens.

“We like to think of ourselves as carney workers, without the mullets and the missing teeth,” Slide the City says on its website. “Slide the City is a family friendly slip-and-slide water party event. There will be live music, food, drinks, water, and of course the biggest slip and slide ever to hit asphalt. Don’t worry, we’ve got it padded. This slide’s got more cushion than your grandpa’s orthopedic sneakers.”

Slide the City’s organizers did not respond to a request for comment.

Photo via Slide the City