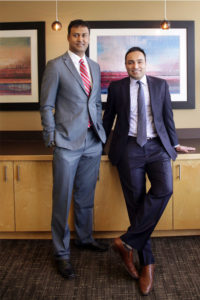 Habib Nasibdar immigrated to the U.S. from India to attend George Washington University business school just after Sept. 11, 2001, and now he’s the founder and CEO of a startup he feels is making his adopted country a better place.

He is the founder of Mindcubed, a data analytics company serving public safety agencies, based in Ballston. Mindcubed provides a platform for police departments, court systems and correctional facilities to look at all their data, analyze it easily, ensure it’s accurate and usable, and predict outcomes for potential decisions.

In a time where political pressure on public safety departments has seemingly never been higher, Mindcubed services are in high demand.

“There is a political alignment happening and more and more talking about how we understand criminal justice data,” Nasibdar told ARLnow.com from its shared workspace at Metro Offices in Ballston. “We really are helping criminal justice agencies and public safety departments understand their data for precise decision-making.”

Four states have entered into pilot programs with Mindcubed, and Nasibdar expects to sign contracts within six months on multiple deals for the service. Mindcubed’s first client, when the company launched in late 2012, was the District of Columbia’s sentencing commission, which hired Nasibdar to help it analyze why so many young people were being incarcerated for nonviolent crimes.

Nasibdar got his start combining data and public safety in 2005, when he was working for a small government contractor and won a contract with D.C. to build an information-sharing infrastructure among its public safety departments, a key recommendation to localities in the aftermath of the Sept. 11 attacks.

An engineer by trade, it was that first contract that gave him the bug to improve public safety. As an Indian immigrant, he said it gave him a way to serve.

“I always felt I never got an opportunity to serve this country and I felt this is a way to help my adopted country,” he said. “This is my way of serving. There’s no better way to feed my kid and my family than to do what I’m doing.”

Because Mindcubed serves government clients, it typically takes 18 months from first contact to secure a deal on a contract. But, he says, patience is a virture. He didn’t bootstrap his company to make a quick buck and move on. 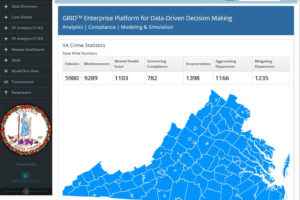 “We are not 25-year-olds in shorts writing on a whiteboard,” he said. “Our approach is very methodical. We’re persistent in the area we know we are successful. This market is just developing, and we see so much opportunity in this domain.”

The platform allows, for instance, a police department to answer questions of policy makers about how many marijuana arrests were made in the jurisdiction, then to break the statistics down into how many of those were under the age of 25, and how many of the under-25-year-olds arrested for marijuana crimes were suffering from mental illnesses. All of the data in their system is cross-checked for accuracy and compliance.

“Agencies right now cannot answer in real time all these permutations and combinations,” he said. “All of these questions lead to more questions. We provide analytics, compliance and prediction, and combine them to make it extremely easy to use. Present that to bureaucracies, and that’s like magic to them.”