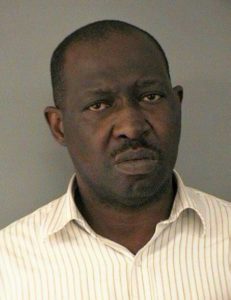 (Updated at 7:45 a.m.) The Arlington County Police Department Special Victims Unit is seeking additional victims of a county home inspector who has been accused of inappropriately touching a woman during an inspection of her home.

Olaseni Cole, 54, was charged with sexual battery after allegedly groping a woman on the morning of Tuesday, April 14, according to Arlington County police.

The incident happened on the 3900 block of 8th Street S., in the Alcova Heights neighborhood. Cole, an Upper Marlboro, Md. resident and an Arlington County employee, was inspecting the woman’s house.

Cole was arrested and is being held at the Arlington County Detention Facility in Courthouse. Police are asking anyone else who might have been a victim to come forward.

“Anyone who has had past inappropriate encounters with this suspect is asked to call Detective N. Brooks at 703.228.4169 or email [email protected],” the press release continued. “To report information anonymously, contact the Arlington County Crime Solvers at 866.411.TIPS (8477).”

Olesani started working for the county in March 2014, according to Arlington Human Resources Director Marcy Foster.