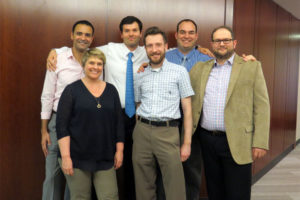 (Updated Tuesday, 9:45 p.m.) Twenty years ago, Hollice Stone watched the Oklahoma City bombing unfold on television, emergency workers crawling through blocks of wreckage, picking out survivors or victims, and she felt an urge to do something.

She later volunteered with the same company that helped with the search and rescue missions in Oklahoma. That experience led her to what she feels is her true calling: preventing a tragedy like the bombing — which killed 168 people and wounded 680 others — from happening again.

Now, Stone is founder and CEO of Stone Security Engineering, which helps design explosion-proofing for buildings, coordinates security for existing buildings and consults with governments to ensure buildings affected by terrorist attacks are as safe as possible.

“It was something that was really needed, and I could make a difference,” Stone told ARLnow.com last week. “I really feel like we have made a difference. That’s why we do what we do.”

Stone Security contracts with the U.S. government, foreign governments, non-governmental organizations and private companies to design protections for buildings, military bases and chemical plants. Stone personally has been on dozens of trips to the Middle East, including Yemen, Iraq and Afghanistan. She founded her company in 2008 because her previous blast-protection engineering firm wasn’t going where the need was greatest. 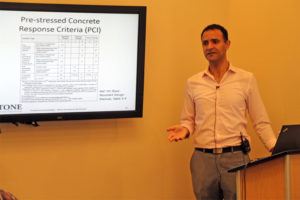 “I wanted to do more in high-risk and high-threat environments,” she said. “The need is so much greater there, and the budgets are tighter.”

For some buildings, that could mean creating barriers far from the structure to prevent ground attacks. For others, it could be hardening of the structure itself. Each case is unique, and for a company that does so much of its work in the most dangerous areas in the world, there are innumerable challenges.

That’s why Stone herself goes to many of the foreign countries, preferring to keep her six full-time employees — four of whom are in Crystal City’s Eastern Foundry — out of harm’s way. But there are more than just security concerns when protecting buildings in war-torn countries.

“There you don’t have access to all the materials you do here,” Arturo Montalva, an associate principal and vice president with Stone, said. “You need creative alternatives. Sometimes you’re working with cables and clips.”

Domestically, Stone has contracts with the Government Services Administration to coordinate the design of government buildings, and has worked with private companies to ensure security of their headquarters. While the market has long been around for protecting buildings from attack, Stone said her company is still well-positioned as more and more entities acknowledge the need to make their buildings safer.

“The number of agencies, organizations and governments looking to provide protection is growing,” Stone said. 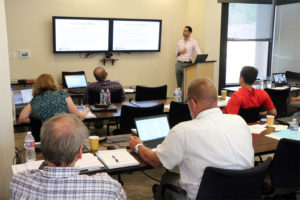 Stone also provides training seminars to educate about building safety, is investing in research into new techniques and materials. The market for blast-proofing is only growing in both the government sector and, particularly, with high-rise buildings in urban environments.

If one of the buildings that Stone has worked on is attacked, it’s more likely to withstand and explosion and stay upright, limiting the damage and casualties. With those protections in place in dozens of buildings around the world, it’s not a stretch to say the company has made thousands of people safer.

“Sometimes my husband makes me take a step back and realize what we’re doing here,” Stone said with a smile. “We’ve made a difference, and it’s been very satisfying.”