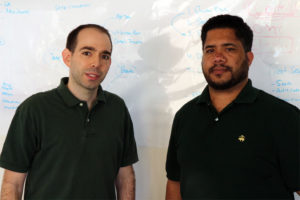 Senior care is an issue in this country that only figures to grow more serious over time. By 2050, the number of Americans older than 65 will double, according to the U.S. Census Bureau, to a total in excess of 83 million people.

One Crystal City has a solution that could help the country — and its seniors — as resources strain to accommodate the Baby Boom generation: robots.

David Pietrocola and Jude Kessler have founded Luvozo, which is developing a robot concierge service that can cater to the needs of the elderly and relieve the burden on staff members at assisted living and skilled nursing facilities. 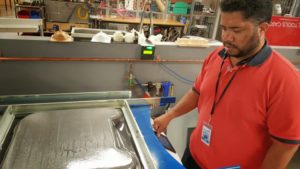 “The idea came from taking care of a our grandparents, and what a struggle it has been for our parents,” Kessler. “We wanted to look into tech solutions to fix that.”

The pair each graduated from Trinity College in Connecticut at different times, and were connected by a mutual friend in 2013 when both were working in research and development for the Department of Defense. Both had an interest in robotics and a passion for helping the elderly. Within months, they founded the company together.

About six months ago, both left their government jobs to work at Luvozo full-time, with a mission: develop a prototype for a robotic concierge service, one that can fill the non-medical needs of the elderly while allowing care facility staff to focus on their medical needs. 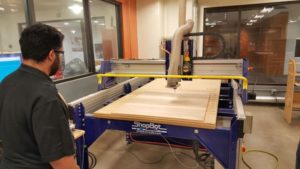 “We take for granted what we can do with computers and smartphones,” Pietrocola said. “A lot of the residents at these facilities don’t know how to use those devices. So our platform gives them a portal to videochat with their loved ones, read the news and be informed about activities throughout the day.”

It’s taken the pair and one part-time staffer six months to build the prototype for their SAM platform — semi-autonomous mobot, it stands for — and they will begin testing next month at a 100-bed facility in D.C.

Pietrocola first started dabbling in robotics when he was at college, and since he’s been here, he founded the D.C. Robotics Meetup group (he stepped down as lead organizer earlier this month). Now, it’s a career, and it’s been made possible by TechShop in Crystal City and LiftOff Health, the incubator just a few blocks away.

Using tools like the 3-D printer, laser cutter and software platforms designed for prototyping. Luvozo has been able to keep overhead costs low and stay bootstrapped to this point. The founders’ lean startup also allowed them to do years of market research, interview facility administrators, staff and residents.

“For us, what drives us is our passion for technology to improve quality of life,” Pietrocola said. “We tried to really understand where the needs were. It’s a long day, and a lot of these facilities are trying to provide services throughout the day.”

The SAM platform can deliver glasses of water. Initially, it had a robotic arm, but due to impracticality, the team scrapped that idea. In talking with residents, Pietrocola smiled at some of the requests and expectations nonagenarians had when told they would soon have concierge robots. Some of them didn’t understand what a robot was — Pietrocola said a frequent analogy he used was Rosie from the Jetsons, except without the human form.

“There were a lot of questions about bingo. Could they play bingo, could they read the numbers,” he said. “A lot of them want to use it to send messages to to each other, or pass knitting projects back and forth. They don’t want the robot to be a snitch.”

Luvozo is still in the very early stages, but after the testing phase, if all goes well, it will begin a pilot program. Testing will only involve a handful of residents in the D.C. facility, while the pilot program would involve all of the 50 in skilled nursing care. If the reviews are positive, they would seek venture capital and begin marketing to the 2,000 large senior care facilities in the country.

While robots are more Hollywood than health care in a lot of minds around the country, Pietrocola and Kessler believe it’s the future to ensure the oldest among us are safe and happy as they transition toward needing more and more care. They spent more time on safety precautions than on any other part of designing the bots.

“We prioritize safety over everything else,” Pietrocola said said. Once the bots hit the market, they will be cheaper than a staff member and make the existing staff more effective. “Facility administrators are very excited because they know the resident experience can always be improved. By having another set of eyes supplementing staff, we provide a safer environment.”