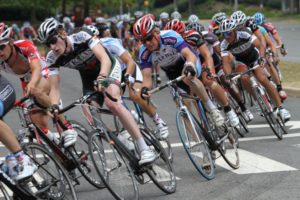 (Updated at 1:20 p.m.) Hundreds of cyclists will descend on Clarendon and Crystal City for the Air Force Association Cycling Classic this weekend.

The two-day event boasts multiple races, with a men’s and women’s professional cycling race in each neighborhood. There will also be multiple amateur races, kids races and a challenge ride.

On Saturday, the highlight of the event is the Clarendon Cup, a professional/amateur course that takes cyclists through the heart of Clarendon. The course is known as one of the most difficult in the United States, according to the association.

Arlington cycling enthusiasts can block out their morning or decide to come for a couple of the races, said Emily Helpern, a PR rep. She recommends viewers watch near the start/finish line, where the main stage is located, at the intersection of Wilson Boulevard N. Herndon Street.

Those willing to brave some of Arlington’s hottest days should plan on using the Metro to get down to the course and get off at the Clarendon or Crystal City stations, both of which are on the Blue Line. There will be some public parking on Saturday and parking is free at the Crystal City’s underground public garages.

Residents may want to avoid driving in Clarendon and Crystal City as a result of the races. Many of the roads, including Wilson Boulevard and Clarendon Boulevard, will be closed.

The following roads will be closed from 4:30 a.m. to 5 p.m. on Saturday for the Clarendon Cup:

The following roads will be closed from 4:30 a.m. to 5 p.m. on Sunday for the Crystal City Cup: