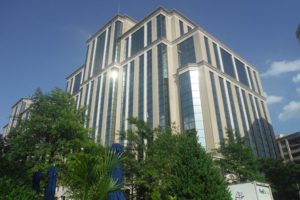 Arlington should have its own fully-operational local radio station by this winter.

The low power FM station (WERA-LPFM) is a project of Arlington Independent Media. AIM Executive Director Paul LeValley says he believes the station will provide a much-needed service to the community.

“Radio isn’t dead; radio is doing great,” LeValley said. “We need more local media — this gives us the opportunity to do that on the radio side.”

LeValley expects the radio station to built, tested and ready to air by the Dec. 9 deadline previously set by the Federal Communications Commission. Once the station has been declared functional, WERA will apply to the FCC for a license to broadcast.

A logo for the station has been created and AIM is currently in the process of finalizing the site for their radio tower: 2300 Clarendon Blvd. The FCC has granted approval and the building owner has written a lease which is being executed this week; all that’s left is for Arlington County to give zoning approval for a radio tower, but LeValley does not anticipate any problems.

Once the station is licensed, programs will be selected by an independent Program Advisory and Review Council appointed by the AIM Board, its staff and the WERA committee. The council will have 11 members, four from AIM and seven from the greater community.

“We’re going to try and be as diverse as we can geographically, occupationally and ethnically,” said LeValley.

Although the council will be independent, the AIM Board and staff and the WERA committee have written up a list of five values that the committee will use as “guiding principles” to decide which programs go on the air. Applications will be evaluated based on: service, enrichment, localism, diversity and innovation.

The community seems to have responded to the idea of a hyper-local radio station. LeValley says AIM gets inquiries every day from residents who want to get involved. In AIM’s view, the more, the merrier.

“We believe in a communication democracy,” said LeValley. “As many people as possible should be producers — media should be made up of many voices in conversation with one another, holding each other accountable.”

For those who want to get involved, but don’t know how, classes in basic radio production will be offered in the early fall. Courses will likely run about three weeks and cost around $90.

Although LeValley says there is still a long way to go between now and the Dec. 9 deadline, he is “as confident as any person can be when venturing into new territory.”