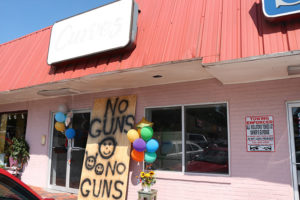 NOVA Firearms will not be moving to Cherrydale after all.

The gun store had leased a space at 2105 N. Pollard Street, causing outcry from members of the community. However, the store’s would-be landlord said today that he has reached an agreement with NOVA Firearms to cancel the lease.

The debate over the gun store heated quickly with County Board candidates speaking out against it and the National Rifle Association coming out in support. Petitions were launched for and against the store, accumulating thousands of signatures. Conservative media outlets ran articles in support of James Gates, the Marine Corps veteran who co-owns the store, drawing national attention.

Community members — and owners of businesses in and around the small shopping center the gun store was to open — took their concerns directly to landlord Kostas Kapasouris.

Kapasouris was open to those concerns, said Bill Hamrock, the co-owner of Bistro 29, which would have been across the street from the gun store. (The restaurant is co-owned by Kapasouris.)

“He knew right away and it wasn’t going to work from the community, but the business owners let him know as well,” Hamrock said.

Kapasouris said that it was all his decision to cancel the lease.

“I don’t want to have a gun store,” he said to ARLnow.com. “I thought it wasn’t a good store.”

Kapasouris said that he decided against having a gun store after the lease was signed and that NOVA Firearms — which has an existing location in McLean — was told of his decision when the store’s owners recently visited the space.

“Listening to the neighbors and the community, the landlord came to an agreement with the proposed gun store and they will not be opening in Cherrydale,” Hamrock said.

Hamrock said other business owners in the area were pleased with the decision to pull the gun store, as just the idea of having such a store was causing them to lose business.

“I had several customers showing me Facebook [posts] that were telling people not to come to the restaurant,” Hamrock said.

Instead of a gun store, Hamrock thinks that the storefront — formerly occupied by Curves fitness studio — could be leased to a small, noncontroversial retail shop or a café.

“It seems perfect for a bakery or small coffee shop,” he said.

Reached via phone, NOVA Firearms co-owner Rachel Dresser declined to comment on the news until she could speak to Gates. Last month, Dresser told ARLnow.com that backing out of the store was “not an option given the money we’ve already invested.”