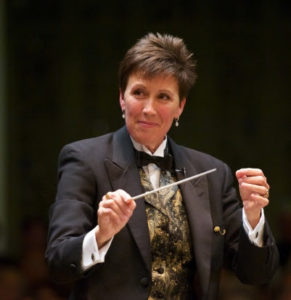 The Metropolitan Chorus, which will celebrate its 50th anniversary this year, is under new artistic leadership.

The Arlington-based organization has announced the appointment of Dr. Nancia D’Alimonte as the group’s new artistic director and conductor. The chorus, which was founded in 1966, is preparing to celebrate its 50th anniversary during the 2015-2016 season with the theme “New Horizons.”

The group is made up of singers from the D.C. area, who perform free concerts between November and May. According to TMC’s website, one of the goals of the group is to “offer music enrichment in the greater Washington metropolitan area through free performances of choral repertoire from all eras.”

D’Alimonte is only the third artistic director and conductor that the chorus has had in the past 50 years. She is also the founder and conductor of the Bethesda-based National Institutes of Health (NIH) Philharmonia, is an education programs consultant for the National Philharmonic at the Strathmore Center and was the head of orchestral activities at George Washington University for 10 years, according to TMC.

The upcoming season will be kicked off with an opening concert on November 1 at the Unitarian Universalist Church of Arlington (4444 Arlington Boulevard).

The seven concerts of the season will take place in various locations, including five in Arlington and one in Rockville, Maryland, which will be a combined concert with the NIH Philharmonia. The group also will also hold its annual sing-along of “The Messiah” at The Kennedy Center over the winter holidays, according to the Metropolitan Chorus’ 2015-2016 season brochure.