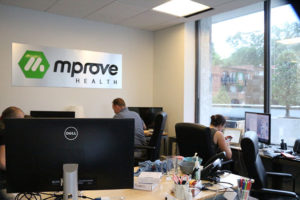 A Rosslyn company may have the answer for keeping research participants active in a pharmaceutical study, and it’s all through mobile technology.

“We’re like the shiny new toy of the research market,” he said.

The company designed a platform that uses texts, automated phone calls and a mobile app to send reminders, instructions and messages of encouragement to participants in hopes that it will keep study retention and compliance rates high.

Study participants can also use the mobile app to log diary entries if that is part of the clinical trial.

Other platforms help research companies recruit people for drug trials, increase patient engagement by allowing participants to customize the app to best meet their lifestyles and allow participants to take research surveys that are part of the trial.

By using the mProve technology, drug research companies prevent about 50 people in a 1,000-people study from dropping out, Lee said. Drug companies spend a lot of money on each person in the study, especially those that drop out or fail to follow the instructions, so any preventive measures can save the company time and money.

“This is a scenario where the work we do is helping get access to better therapies,” Lee said. 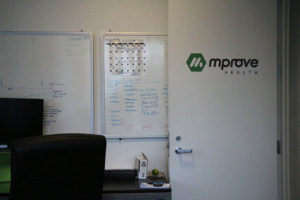 mProve technology is currently being used by many of the biggest drug companies, including Pfizer, in the U.S. and more than 50 countries around the world, according to Lee.

Lee first came up with the idea behind mProve five years ago while talking with a friend about improvements research studies could use, he said. From there the company has grown fast.

A typical day of work for mProve employees includes helping a client’s study to communicate with participants, developing new programs for the mProve software and helping to train researchers with the software, he said.

mProve looks for its employees from local universities in the D.C. area, but it’s also hiring people with three to seven years of experience now. All jobs can be found on the company’s website. With so many employees coming from D.C. schools, location was important for the company, he said.

Lee originally started the company in Alexandria but later moved to Arlington. The company now has office space in the UberOffices at 1400 Key Boulevard in Rosslyn.

“Arlington is a nice place [for our business] because one, you find people who are interested in global health, and two, because you have to travel a lot,” he said. “Arlington is kind of a perfect home where everyone is happy.”