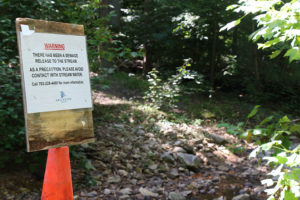 An advisory warning to people to avoid contact with water from Donaldson Run has been lifted.

The advisory was put into place on July 11 after sewage from a broken pipe leaked into the stream by Military Drive. Two additional leaks followed three days later, causing the county to issue another advisory.

The sewage in the water was naturally flushed out and the county fixed the broken pipe, as well as the protective casing around it.

The county recently tested the water downstream from the break for E. Coli and found normal levels, according to a county press release.

Although there is no more sewage in the water, people should still never drink or bathe in stream water, according to the county. Residents should also always wash their hands after coming in contact with water from local streams.