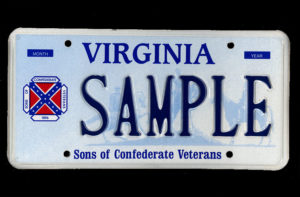 An existing state law on the books says specialty license plates issued for members of the Sons of Confederate Veterans may not include an emblem, like the Confederate battle flag. An injunction on First Amendment grounds prevented the Commonwealth from enforcing that law, but a Supreme Court ruling in June prompted Attorney General Mark Herring (D) to file a motion to vacate the previous order.

In a press release, the attorney general’s office says that Judge Jackson Kiser will next file an order that will specify whether nearly 1,700 previously-issued Confederate plates may be recalled.

Today in federal district court in Danville, Judge Jackson Kiser ruled from the bench that he will dissolve his 2001 injunction that had allowed the Sons of Confederate Veterans to place the confederate battle flag on certain specialty license plates in Virginia. On June 26, Attorney General Mark R. Herring filed motions (see below) to dissolve the injunction and vacate the order that had required placement of the flag on SCV license plates. The Commonwealth will now be able to enforce its existing law regarding SCV plates which states “No logo or emblem of any description shall be displayed or incorporated into the design of license plates issued under this section.”

“This ruling will allow Virginia to remove a symbol of oppression and injustice from public display on its license plates,” said Attorney General Mark Herring. “Virginia state government does not have to and will not endorse such a divisive symbol. I appreciate Governor McAuliffe’s leadership in calling for the removal of the flag and those on my team who moved quickly to get it done.”

Judge Kiser’s ruling will not be official until he enters his order, which will also address whether the decision will apply prospectively to new license plates, or retroactively to include existing ones. Deputy Attorneys General Rhodes B. Ritenour and Jeffrey M. Bourne and Senior Assistant Attorney General Janet Westbrook handled the case on behalf of the Commonwealth.