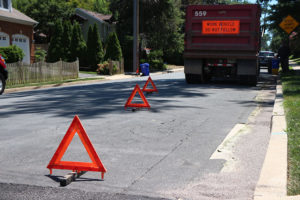 N. Lexington Street was closed for 45 minutes today after a dump truck caught on fire, causing it to leak hydraulic fluid.

The fire ignited in the truck’s engine compartment around noon, near the intersection of N. Lexington Street and Little Falls Road.

The dump truck leaked about three to five gallons of fluid, said Battalion Chief Matt Herbert, of the Arlington County Fire Department. The fire was started by a mechanical issue, he said.

Hazmat crews had already been to the scene as of 1:15 p.m. They put absorbent on the fluid, which prevented it from going into the storm drains, Herbert said. Most of the fluid was on the right side of the road against the edge.

“The absorbent picks it [hydraulic fluid] up and the company cleans it up and takes it to an authorized dump,” he said.

A hazmat crew and other members of the fire department, including the fire marshal, were still on scene waiting for the contractor to come pick up the absorbent. N. Lexington Street is open, but one lane remains blocked off.

The hydraulic fluid and absorbent are not dangerous to residents Herbert said.