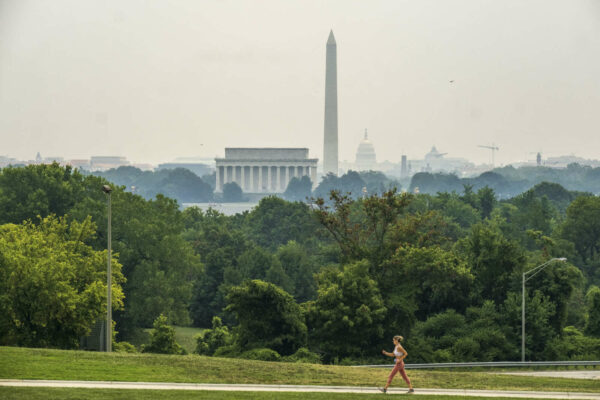 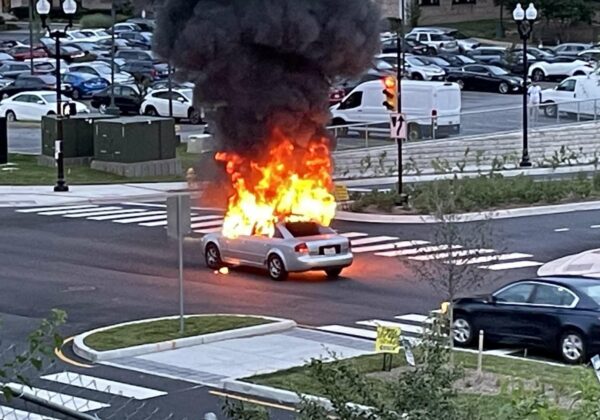 A car caught fire in the middle of a Columbia Pike intersection last night.

The carbeque happened around 8:30 p.m. Monday at the intersection of the Pike and S. Jefferson Street, near Arlington’s western border. Video shared with ARLnow (below) shows the car being driven while flames shoot from the engine compartment, before it finally comes to a stop and the flames and smoke intensify.

The car was fully engulfed, sending a column of dark smoke into the sky, by the time firefighters arrived on scene. Local residents gathered to watch the firefighting effort.

“They showed up almost immediately and quickly took care of the situation,” he said. “They seriously showed up within 5 minutes… the Arlington [County] Fire Department is seriously awesome.”

Both eastbound lanes of Columbia Pike were blocked for nearly an hour due to the blaze and the subsequent cleanup. 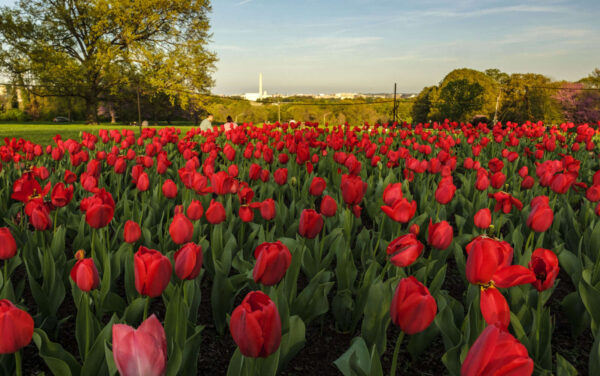 APS to Offer Coronavirus Testing — “Beginning the week of April 19, APS will begin providing free medical testing for students and staff who are symptomatic, or who have been exposed to COVID-19. Walk-up testing will be conducted after school hours with parent/guardian consent. Walk-up testing sites at Glebe Elementary, Kenmore Middle and Wakefield High Schools provide trained staff to assist in mid-nasal swab testing using the RT-PCR test after school hours.” [Arlington Public Schools]

New DCA Concourse Opening Next Week — “The shuttle buses will soon be relocated to Philadelphia. And the air stairs, no more. After nearly 25 years, officials at Reagan National Airport on Thursday unveiled a much-anticipated addition, a sleek 14-gate concourse that will mark the end of operations of the much-maligned Gate 35X. American Airlines will begin service Tuesday out of the new concourse.” [Washington Post, NBC 4, DCist]

New Concessions Coming to DCA — Timber Pizza Co. and Peet’s Coffee are among the new food and drink options coming to National Airport and its new concourse. [Twitter, Twitter]

Group Rallies for Affordable Housing –“I’m at a rally hosted by the ACE Collaborative, community organizers who work with Asian American residents in Arlington. They’re in [Pentagon City] this evening, asking the county to take steps to end displacement as rents rise. In the immediate term, the group is calling for the county to add $8 million to its housing grant program in the next budget.” [Twitter]

Car Fire on GW Parkway — “ACFD is on scene of a vehicle fire on the GW Parkway near Spout Run. The vehicle is fully engulfed in flames, per the first arriving firefighters.” [Twitter, Twitter]

Animal Control Saves Turtle — “We need to thank Officer Davis for helping this snapping turtle, who was trying to cross I-395 during rush hour. Thankfully, she was able to safely remove him, bring him to the shelter for a check-up, and then release him back into the wild where he belongs!” [Twitter] 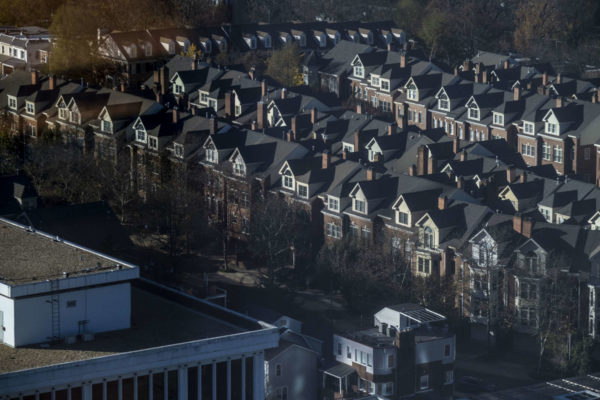 Sexual Battery Suspect Arrested — “At approximately 1:12 p.m. on November 20, police were dispatched to the 4200 block of Wilson Boulevard for the report of a suspicious person matching the description of the suspect in the November 17 incident. Responding officers located the individual and took him into custody without incident.” [ACPD]

Hospice Worker Accused of Sexual Assault — A 57-year-old Arlington man has been charged “with sexually assaulting a hospice patient in October. Detectives were first notified on Nov. 11, that an 80-year-old Reston man disclosed to a family member that he awoke to [the man] performing a sex act on him in his home.” [Fairfax County Police]

Man Arrested After Incident in Park — “Arlington County Police say that a local man tried to kick a dog and then pepper sprayed its owner Thursday afternoon at Chestnut Hills Park.” [Patch]

SUV Fire in Westover — Washington Blvd was blocked around lunchtime Sunday due to a vehicle fire near Westover Village. The SUV was fully engulfed in flames when firefighters arrived. [Twitter]

MyEyeDr Opening Today in Ballston — The new MyEyeDr location in Ballston is set to open today, according to a press release. The chain bills itself as “one-stop shop to get an eye exam, buy new eyewear or even shop for sunglasses.”

Metro Making Budget Cuts — “Metro board members unanimously approved service cuts and a buyout plan Thursday aimed at avoiding as many layoffs as possible as the transit agency faces a $176 million budget shortfall due to the coronavirus pandemic.” [Washington Post]

A vehicle is on fire on northbound I-395 near Shirlington.

A portion of the highway is expected to be shut down temporarily while firefighters battle the blaze.

The car is on the righthand shoulder, fully engulfed in flames.

A fire in the engine compartment of a Loudoun County commuter bus snarled traffic in Rosslyn this morning.

The fire was reported shortly before 7:30 a.m. on Lee Highway and N. Nash Street. The fire was small — at least compared to yesterday’s truck fire in Pentagon City — and quickly extinguished.

No injuries were reported, but at least two lanes of Lee Highway were blocked as a result of the emergency response. 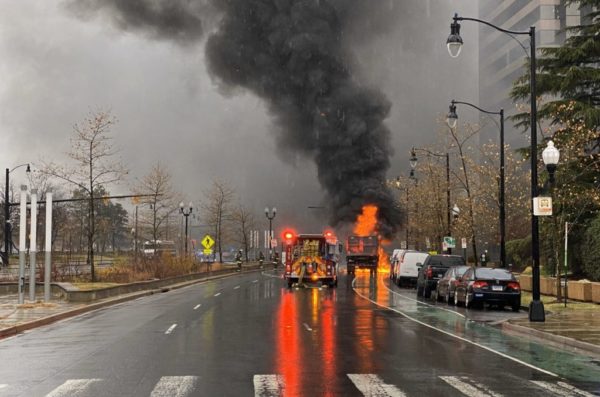 (Updated at 11:50 a.m.) Arlington County firefighters are on scene of a vehicle fire in Pentagon City, near the TSA and DEA headquarters and the front entrance to the mall.

A truck caught fire and was fully engulfed in flames, sending a column of dark smoke rising into the air — visible from nearby office buildings and I-395 — around 11 a.m., near the intersection of S. Hayes Street and 12th Street S.

The fire has been extinguished but Hayes Street is closed between Army Navy Drive and 12th Street S. Police are helping to direct traffic and preparing to reopen the southbound lanes of Hayes.

A video of the fire, taken from a nearby building, shows a small explosion as someone can be heard describing the fire — apparently to a 911 dispatcher — in the background. (Note: there is NSFW language in the video.)

ACPD is conducting traffic control in the area of S. Hayes at 15th Street as @ArlingtonVaFD units respond to a vehicle fire. Follow police direction in the area. pic.twitter.com/OmLMhoSmrQ

@ARLnowDOTcom any word on what’s happening in pentagon city?? pic.twitter.com/LyGHxuT6dT 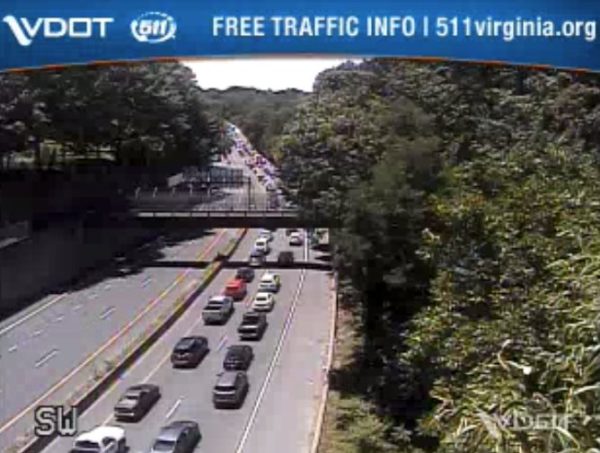 (Updated at 1:35 p.m.) The westbound lanes of I-66 are blocked approaching the Spout Run Parkway in Arlington due to a vehicle fire.

The fire is now reported to be out, but the lanes are temporarily closed due to emergency activity. Traffic slows just past Rosslyn.

Police are in the process of opening up one lane of traffic to squeeze by the scene of the fire. 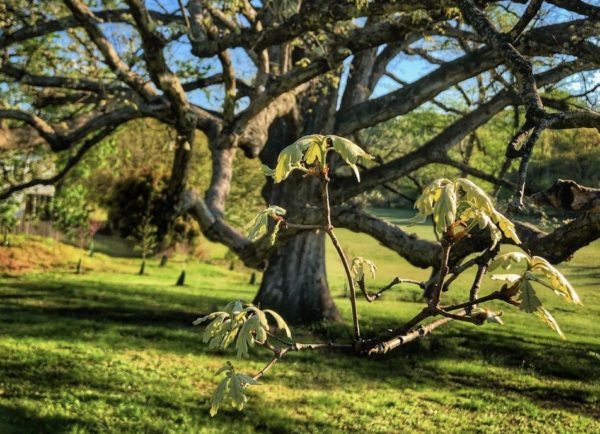 Couple of Carbeques — Vehicle fires shut down several lanes of northbound I-395 and both lanes of N. Glebe Road near Chain Bridge during yesterday’s evening rush hour. [Twitter, Twitter]

Caps Significant Others Watch Game in Clarendon — “Hey, isn’t that… the wives and girlfriends of Capitals players, gathered together at Bracket Room during Monday night’s playoffs game against the Carolina Hurricanes?” [Washington Post]

Nearby: Virginia Tech Still Picking Alexandria Site — “When Alexandria and Virginia Tech announced plans for a new Innovation Campus… the university gave every indication it would build the $1 billion project at Stonebridge Associates’ Oakville Triangle property… But the deal is not done yet — and the university has expanded its search to other sites in Alexandria.” [Washington Business Journal] 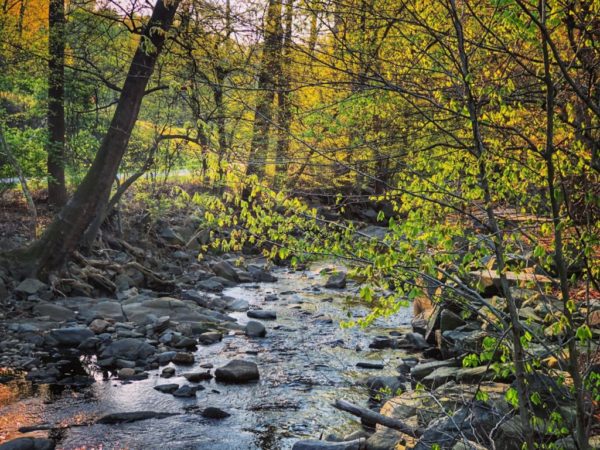 Flash Flood Watch Issued — Arlington and the region is under a Flash Flood Watch starting at noon today. Heavy rain and storms, some of which may be severe, are expected this afternoon and evening. [Twitter, Twitter]

Anytime Fitness Opening Today — Anytime Fitness, a new 24/7 gym, is set to open today in Rosslyn. “New member specials will be available through the end of April and free community workouts will be held every Saturday in May,” said a PR rep.

Protest Yesterday in Ballston — “A protest against power company AES is happening this morning in Ballston outside the company’s HQ. ACPD is on the scene watching over the protest, which is peaceful and includes speeches and signs against AES’ activities in Puerto Rico.” [Twitter]

Bike Recycling Event Next Month — “Bikes for the World will be collecting unneeded bicycles, bike parts and accessories on Saturday, May 4 from 8:30 a.m. to 3 p.m. as part of the Arlington E-CARE (Environmental Collection and Recycling Event) at 1425 North Quincy St.” [InsideNova]

Carbeque on I-395 — A car caught fire on southbound I-395 near Glebe Road just before Thursday’s evening rush hour. Several lanes were closed as a result of the vehicular inferno, but firefighters eventually extinguished the raging flames. No injuries were reported. [Twitter]

(Updated at 3:15 p.m.) Firefighters battled an intense vehicle fire today in front of the Arlington Assembly of God Church, along Route 50 in the Arlington Forest neighborhood.

Initial reports suggest that a food truck caught fire, though the vehicle was later reported to be a work van. A traffic camera showed flames and a thick column of smoke coming from the van as firefighters arrived on scene. The smoke could be seen from as far away as Crystal City.

The fire was extinguished after a few minutes and no one was injured. The fire marshal’s office is investigating the cause.

Engine 109 arrived to find this work van fully involved in the 4700 block of Arlington Blvd this morning. No injuries were reported. Fire Marshals are investigating the cause. Consider keeping a #FireExtinguisher in your vehicle safety kit. You never know when you may need one. pic.twitter.com/Dg6xyYGZxu