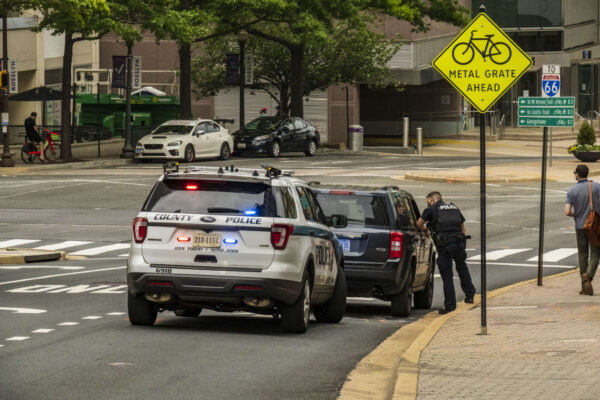 Arlington County will now have a Community Oversight Board and Independent Policing Auditor able to investigate community complaints about police officers.

During a four hour meeting last night (Wednesday), 24 leaders and community members spoke, ranging from Arlington NAACP leadership to police officers. The County Board overcame some disagreements to unanimously approve a new board that takes complaints and has an independent auditor to conduct investigations concurrent with internal police department investigations.

If necessary, the board can subpoena for evidence or witnesses if the department withholds them.

These were powers recommended by the Police Practices Work Group, convened one year ago after the killing of George Floyd at the hands of police in part to imagine what a review board could look like. And proponents said that subpoena power — the most hotly contested authority last night — is the sole key to a fully independent board.

“The subpoena power is integral to the independence of the Community Oversight Board,” County Board Vice-Chair Katie Cristol said. “Otherwise, the community oversight is just another step in the ACPD chain of command.”

On Twitter, she further explained the actions taken last night.

The PPG recommended empowering a Community Oversight Board & designating a professional auditor to investigate on their behalf, concurrently w/ but independent of ACPD's internal investigations. We adopted their model! Incl. subpoena power, to ensure a strong & independent COB.

Above all: We adopt this strong COB proactively. No accident that Arlington hasn't had misconduct headlines: Officers' own zero tolerance for misconduct is the bedrock of our trustworthy PD. The COB brings community into this high standard of accountability & adds transparency.

Board Member Libby Garvey, who ultimately voted in favor of the ordinance, did express some reservations with the power.

“Right now, the County Board has the right to subpoena… It’s one of our jobs,” she said. “I feel it’s unfair to put that on resident volunteers, as well-trained and well-meaning as they might be.”

Steve Yanda, the treasurer of Arlington Coalition of Police, said the group supports a review board but not the subpoena power, given how closely ACPD officers watch themselves.

The last three years of investigations by ACPD’s Office of Professional Responsibility (OPR) led to 639 suspension hours and to 11 officers leaving the department, he said. ACPD-originated complaints led to 53% of the suspension hours and 45% of the officer departures.

“It flies in face of logic to believe that a department that scrutinizes itself to the degree that the ACPD does, needs to also be monitored under threat of subpoena power by the community it serves,” he said.

And that OPR investigative process can be “mentally and physically exhausting and nerve-wracking,” said officer Tracey Bates.

“Adding on any additional pressures to an already thorough, exhausting process will lead to more highly qualified officers leaving the department, and with that comes the decline in officers, a decline in quality of services, and a decline in community engagement,” he said.

NAACP President Julius “J.D.” Spain said the board cannot privilege the voices of a few worried about police morale over the voices of community members advocating for a powerful, independent board, as recommended by the Police Practices Workgroup.

“The time has come in this country, in this Commonwealth, to stop rearranging furniture and start rebuilding the house, with transparency and accountability,” he said.

In a letter to the County Board earlier this year, public defender Brad Haywood said the PPG’s recommendations “give that oversight body the power it needs to solve the problems it identifies; to obtain the information, to conduct thorough investigations, and to make recommendations not just for how individual officers can do better, but how the Department and the County more broadly can do better.”

Even with these broad authorities, County Board members said the work is just beginning.

“We have to set in place an opportunity here for the community to figure out if our police department is to be trusted, if they don’t believe so already, and vice versa: for the police department to trust that the oversight being instituted today is designed not to get them, but to improve our overall approach to policing,” said Christian Dorsey.