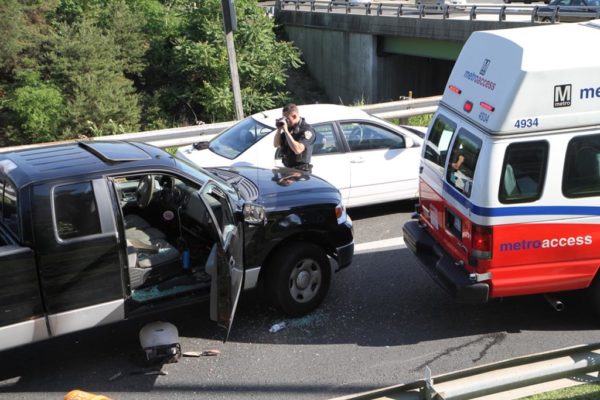 A report released Tuesday by Commonwealth’s Attorney Theo Stamos found that Arlington County Police officers were justified in shooting a man near I-395 in May and will not face charges.

Two officers, Steven Yanda and Matt Chattillion, shot 28-year-old Daniel George Boak of Centreville on May 17 around 4:30 p.m. after he struck Yanda with his black pickup truck. The officers were attempting a traffic stop at the highway’s Glebe Road exit.

Stamos’ report said that Boak did not comply with officers’ commands to show his hands when he stopped, and he instead accelerated into Yanda, pinned him against a white Toyota sedan in front with his car and continued to accelerate.

“I could feel pressure on my leg increasing,” Stamos quotes Yanda as saying in his statement to investigators. “He wasn’t just bumping me and then reversing. He continued to come forward. So, it seemed he was trying to injure or kill me. I feared for my life.”

Both fired into the vehicle and struck Boak four times: in the head, neck chest and forearm. Another officer who arrived on scene then placed the car into reverse to free his colleague. Boak was pronounced dead at Virginia Hospital Center at approximately 5:30 p.m. that same day, after the officers attempted CPR.

Stamos said the officers’ statements on the incident were consistent, as well as the statements from civilians in cars nearby. Stamos added that video from Yanda’s in-car camera and from a balcony overlooking the exit show him trapped between the two cars.

A blood sample found that Boak had traces of cocaine, morphine and heroin in his bloodstream, as well as a zip lock baggie in his car containing a small amount of cocaine and a glass-tube smoking device that contained cocaine residue. Stamos also noted that Boak’s family members said he had a heroin addiction and “problems with authority.”