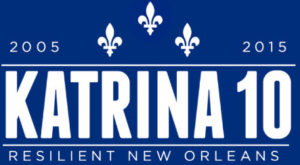 A Courthouse restaurant owner is hosting a gathering to celebrate the city of New Orleans’ progress since Hurricane Katrina.

Chef David Gaus, a New Orleans native who owns the Bayou Bakery, is holding an event called “Katrina 10” to show how far the city has come in the 10 years since the hurricane’s destruction.

Katrina 10 will be held at the Bayou Bakery (1515 N. Courthouse Road) from 5-7 p.m. on Aug. 29. There will be New Orleans-style food and drinks, with music provided by Laissez Foure. The gathering will also have an open mic for anyone to share their Katrina stories.

“Chef David Guas, who is a fellow New Orleans native, has and continues to give back to his beloved home city through charities and fundraisers. After watching the waters ravage the neighborhoods in which he grew up and his parents’ home, he truly knows the real impact of the disaster all too well,” said Simone Rathlé, the PR rep for the restaurant and Guas’ wife.

The event kicks off Guas’ charity week, where he will donate $10 from each sale of his cookbook, DamSweetGood, to the Roots of Music, a nonprofit that helps provide free musical education to children in New Orleans. The charity week runs from Aug. 29 until Sept. 5.

“As a New Orleans native who has seen the devastating affects of Hurricane Katrina first hand, it is both with a heavy heart, and hopeful focus on the road ahead, that we think back to the day it struck 10 years ago,” Rathlé said in a press release. “Tragedy often gives way to hope and brings people together to rise up.”