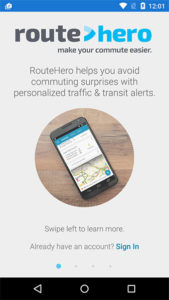 RouteHero, built by Arlington native Thomas Woo, provides traffic and Metro updates based on an user’s route and time of travel.

“It’s a really good opportunity to limit some of the hassle of the commute,” Woo said. “You don’t have to check traffic in the morning. You don’t have to worry if the Metro will be single tracking when you get there. We’ll do the worrying for you.”

People can customize the app to include multiple commuting routes. Each alert comes through a text message, Woo said.

“What my app does is you put in your regular commute, whether it is driving or Metro, and the time you commute and we’ll send you an alert if there is traffic or an accident,” Woo said. 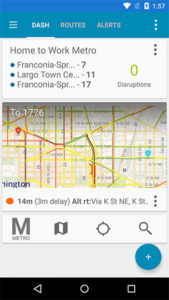 Woo developed the app based on his own personal experience with commuting from his home in Falls Church to his previous job, he said. He signed up for Google Now and Metro alerts, but he said the alerts weren’t specific enough. He wanted something that would make his commute easier.

“My app sends you one alert just what you want and just when you need it,” he said.

In addition to the alerts, the app also shows the Metro schedule for the lines the user travels. It could work as a compliment to navigational apps Google Maps or Waze because RouteHero tells users when they should find different routes, and then users can use the other apps to find a new travel path, he said.

RouteHero won the D.C. Tech.co Startup of the Year Competition held at 1776 Crystal City last Wednesday, Sept. 9, which gave Woo validation that his app was useful for commuters, he said.

“It was a good confirmation that yes, people want a traffic and transit app for their commute,” Woo said. 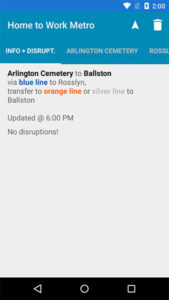 RouteHero is currently available for Android phones only, but Woo said he is working on an iOS version of the app, which he tentatively expects to have in the next three to five months.

Woo also plans to expand the app to include other modes of transit, such as Metrobus and Capital Bikeshare, and to be able to run alerts for transit systems outside of the D.C. area, such as the “T” in Boston or the subway in New York City.

The app is currently free and is supported with advertisements, but he may add in-app purchases, Woo said.

“The idea is that if you have more than one route, you’ll have to pay a monthly fee of $1,” he said.

Public transportation alerts would remain free, regardless of how many alerts an user requests, Woo said.