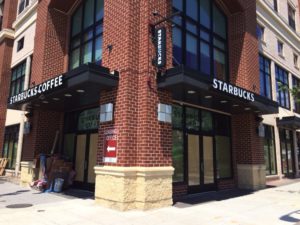 Starbucks customers may be able to order a glass of wine with their Pumpkin Spice Lattes at two Arlington locations in the next few months.

Starbucks has filed liquor license applications for its new Penrose Square (2413 Columbia Pike) and Arlington Ridge Shopping Center (2925 S. Glebe Road) locations. If approved, the stores will be able to serve beer and wine, in addition to the coffee and tea drinks the company sells.

Starbucks is offering beer and wine at select stores as part of its new “Starbucks Evenings” service, which also includes small plates.

According to a sample menu, the coffee chain will sell various red, white and sparkling wines by the bottle and glass, as well as craft beers. Small plates include truffle mac and cheese, bacon-wrapped dates, chicken skewers and truffle popcorn. Menus vary by region.

License applications for the two stores are currently pending, according to the Virginia Department of Alcohol Beverage Control.

Wine and beer will come to the Long Branch Creek location in “probably a few months,” said a supervisor at the store but she could not provide any additional information. USA Today reported in August that Starbucks is launching Starbucks Evenings at more than 2,000 of its 12,000+ U.S. stores, with many opening by the end of the year.

A Starbucks spokesman stopped short of confirming that the two South Arlington stores will in fact be serving beer and wine in the near future.

“Just as each customer is unique, so are our stores and we consider a broad range of products and experiences for each neighborhood,” said the spokeswoman. “And, as you’ve probably seen, we’re in the very early stages of considering our stores at 2413 Columbia Pike and 2925 S. Glebe Road for the Evenings menu. It’s a long and thoughtful process and the permit filing is just one of many steps we take.”

END_OF_DOCUMENT_TOKEN_TO_BE_REPLACED

More Stories
Legal Insider: How Can a Medical Professional Help Me with Security Clearance?Shirlington AMC Theater Closes for Renovations